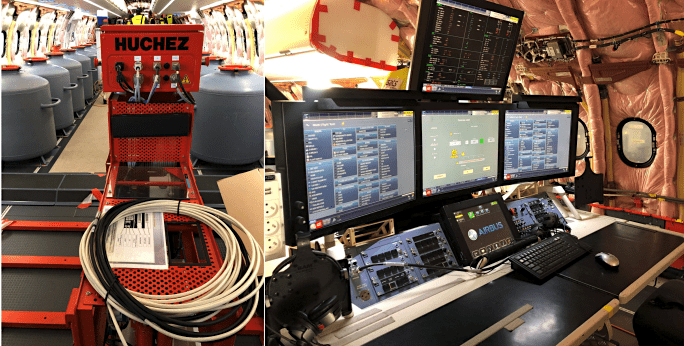 Airbus completed the first test flight of its new A321XLR aircraft, with the flight lasting 4 hours and 35 minutes. (Photo courtesy of Airbus/Lutz Borck)

The A321XLR is the latest extra-long range variant of the Airbus A320 family that features a 700 nautical mile increase over the A321LR. During the maiden flight, lasting 4 hours and 35 minutes, the Airbus test pilots and engineers evaluated the aircraft’s “flight controls, engines and main systems, including flight envelope protections, both at high and low speed,” according to the company.

Three fully-instrumented A321XLRs using CFM’s LEAP-1A and Pratt & Whitney’s GTF engines are being evaluated as part of the flight test campaign that will also use one A321neo prototype in the earlier phases.

The flight test instrumentation inside the A321XLR cabin featured in a presentation shared by Airbus.

Airbus developed the XLR with a focus on maximizing commonality with the rest of the A321 family, introducing only changes necessary to achieve the longer range. Among those changes are a permanent rear center tank to hold more fuel, modified landing gear to improve maximum takeoff weight to 111 tons and an optimized wing trailing-edge flap configuration to preserve the same take-off performance and engine thrust requirements as the A321neo.

Philippe Mhun, Airbus EVP Programmes and Services, described completion of the first test flight as a “major milestone for the A320 family.”

“With the A321XLR coming into service, airlines will be able to offer long-haul comfort on a single aisle aircraft, thanks to its unique Airspace cabin,” Mhun said.

Leading up to the first flight of the A321XLR in Germany, engineers back at the Airbus headquarters in Toulouse have been virtually testing the aircraft systems in a laboratory filled with numerous racks containing modules that are identical to those inside the avionics bays of the three A321XLR flight-test aircraft. The modules are directly linked to the company’s Development Simulator, “S22,” allowing the engineering test pilots to validate the A321XLR’s “modified flight control system laws, in specific conditions—such as during flare or during high-speed flight,” according to Airbus.

Middle East Airlines (MEA) is the launch customer for the A321XLR, which has amassed 500 orders from more than 20 customers, according to the latest aircraft order data released by Airbus.

MEA’s first A321XLR is expected to be ready for passenger-carrying flights by 2024.