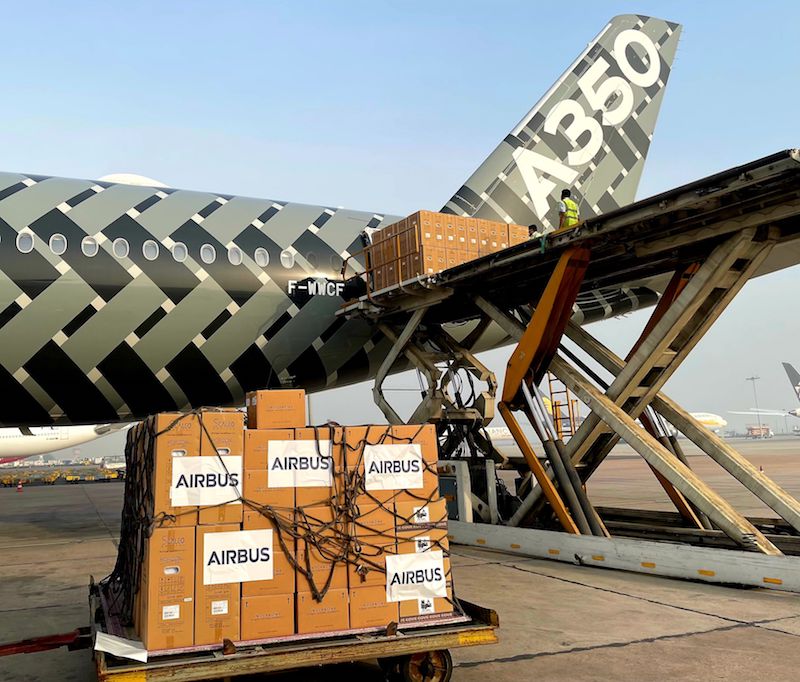 Airbus is launching a freighter version of the A350, pictured here in a passenger to freighter configuration preparing for a June 2 flight carrying COVID-19 supplies to New Delhi, India. (Airbus)

Airbus is developing a version of its wide-body A350 aircraft for the commercial air cargo market, according to the half-year results posted by the Toulouse-based manufacturer on July 29.

Revenue increased 30 percent in the first half of the year for Airbus, up to €24.6 billion from €18.9 billion during the same period in 2020. The company is also updating its outlook for 2021, projecting a total of 600 commercial aircraft deliveries, up from 566, and an operating income of 4 billion euros.

While the guidance was updated, Airbus included a cautionary statement that it assumes “no further disruptions to the world economy, air traffic, the Company’s internal operations.” Airbus CEO Guillaume Faury believes the freighter version of the A350 will be an attractive new option to air cargo operators.

“It is our ambition to continuously adapt and evolve our product in line with customer needs, as an example we did it with the A321XLR back in 2019. In that period and following positive customer feedback we obtained the board of directors approval for the freighter derivative of our well-established A350 platform,” Faury said. “Based on the efficiency of the A350, the freighter version is planned to deliver lower fuel burn compared to freighter versions of that size, for example around 20 percent less fuel burn compared to twins, 20 percent less compared to tri-jets, and 40 percent less compared to quads, four-engine planes.”

Faury said the A350 freighter will be compliant with the International Civil Aviation Organization’s (ICAO) CO2 design certification emissions standard when it becomes effective in 2028. No other major design or performance details were released by Airbus about the A350 freighter during the call.

According to Faury, Airbus is still assessing market demand for the new A350 variant and has not yet arrived at a set production rate but will build its development into existing A350 assembly lines.

“The beauty of that program is that it will be embedded into the A350 production system, so we don’t need to plan for individual rates with the freighter. It’s a commonality with the [A350] dash 900 and dash 1000. The production rates will depend upon the success of the program at a later stage,” Faury said.

The newest variant of the A350 will become a direct competitor to Boeing’s 767 and 777 aircraft, which have both dominated the air cargo segment of the commercial air transportation market over the last decade. Boeing has not committed to launching a freighter version of its 777X—the re-engined 777 variant is scheduled to enter service by 2023—although CEO David Calhoun said that aircraft type would be ideal.

“We need to develop a new ICAO compliant freighter version opportunity. I circle the 777Xs, the logical place for that and the smart place to do that,” Calhoun said during Boeing’s second-quarter earnings call. “Without suggesting that we’ve already launched and/or that we have one plan by the day, we’re confident and I’m confident that that might be the next of our programs. And it will be an incredible freighter with incredible long-term advantages for our major customers. So anyway, that’s where we stand.”

The decision by Airbus to launch the A350 freighter came a day after the International Air Transport Association (IATA) published data showing that air cargo airlines collectively experienced their strongest half-year performance since 2017.

Global demand for air cargo during the first six months of 2021 increased by 8 percent above the same period in 2019, according to IATA.

The post Airbus Targets 2025 for A350 Freighter appeared first on Aviation Today.