B4UFLY provides recreational drone pilots a mobile application with information on whether it is safe to fly in a particular airspace using informative, interactive maps with filtering options. The app contains information about controlled airspace, special use airspace, critical infrastructure, airports, national parks, and temporary flight restrictions, according to the FAA.

The new features will give pilots more data about local ground-based advisories. Hegranes used the example of his local park where there are restrictions around takeoffs and landings.

“This is one of the unique aspects of drones, the airspace is primary; We have to understand the airspace that we fly in, but where we take off from where we land from is going to have additional rules that you want to be aware of,” Hegranes said.

B4UFLY will have to work closely with local governments to instate these advisories. Hegranes said while they are launching this feature in San Francisco first, states like Virginia and Tennessee are working with Kittyhawk to integrate their data into B4UFLY. 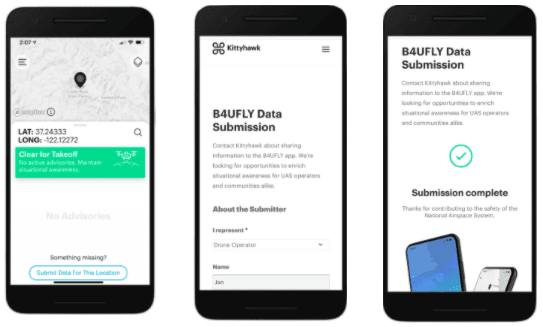 B4UFLY app provides recreational drone pilots with information on whether it is safe to fly in a particular area using informative, interactive maps with filtering options. (Kittyhawk)

“We’re working really closely with governments, enterprise, drug delivery companies, but also our user base to help you, help us and to create a better total picture of the airspace, and where we operate from.”

“It’s a really interesting way for users to start to provide more feedback and more information for what is going on in the airspace,” Hegranes said. “This applies to users, this applies to cities and states, but also more and more enterprise use cases where you’re a utility company doing inspections, do you want to show other airspace and drone pilots that there’s activity in a place that may not have a lot of aircraft typically or if you’re doing drone deliveries in a specific corridor, or in locations, how can you provide situational awareness to other drone pilots that there’s a new type of drone activity.”

The feedback will be constantly reviewed for accuracy and actionable items which can be added to the app, Hegranes said. However, Kittyhawk is still working through which data sets it will pull from.

“I’d say probably the biggest question that we’ll be working through is, as we do get some of these submissions, what’s the right data source to pull from,” Hegranes said. “Do we create these ourselves or their existing ones like we have with San Francisco?”

The upgrades are ultimately aimed at providing pilots with more information for flying, not to create no-fly zones.

“Our focus is impacting safety, improving situational awareness with more of these advisors so the more that we can put into B4UFLY and create that, the better,” Hegranes said. “This is not to create no-fly zones, that’s for the FAA and the airspace but certainly our view and in working with our partners we think it’s important to share these additional advisories and rules that do impact that full operation.”