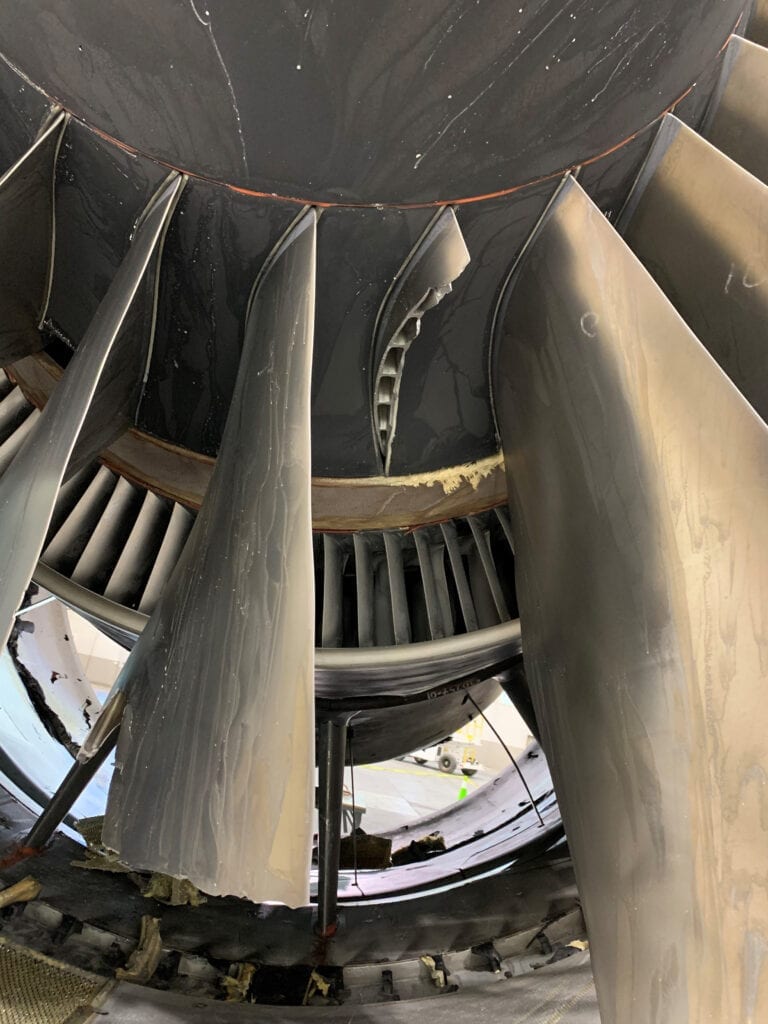 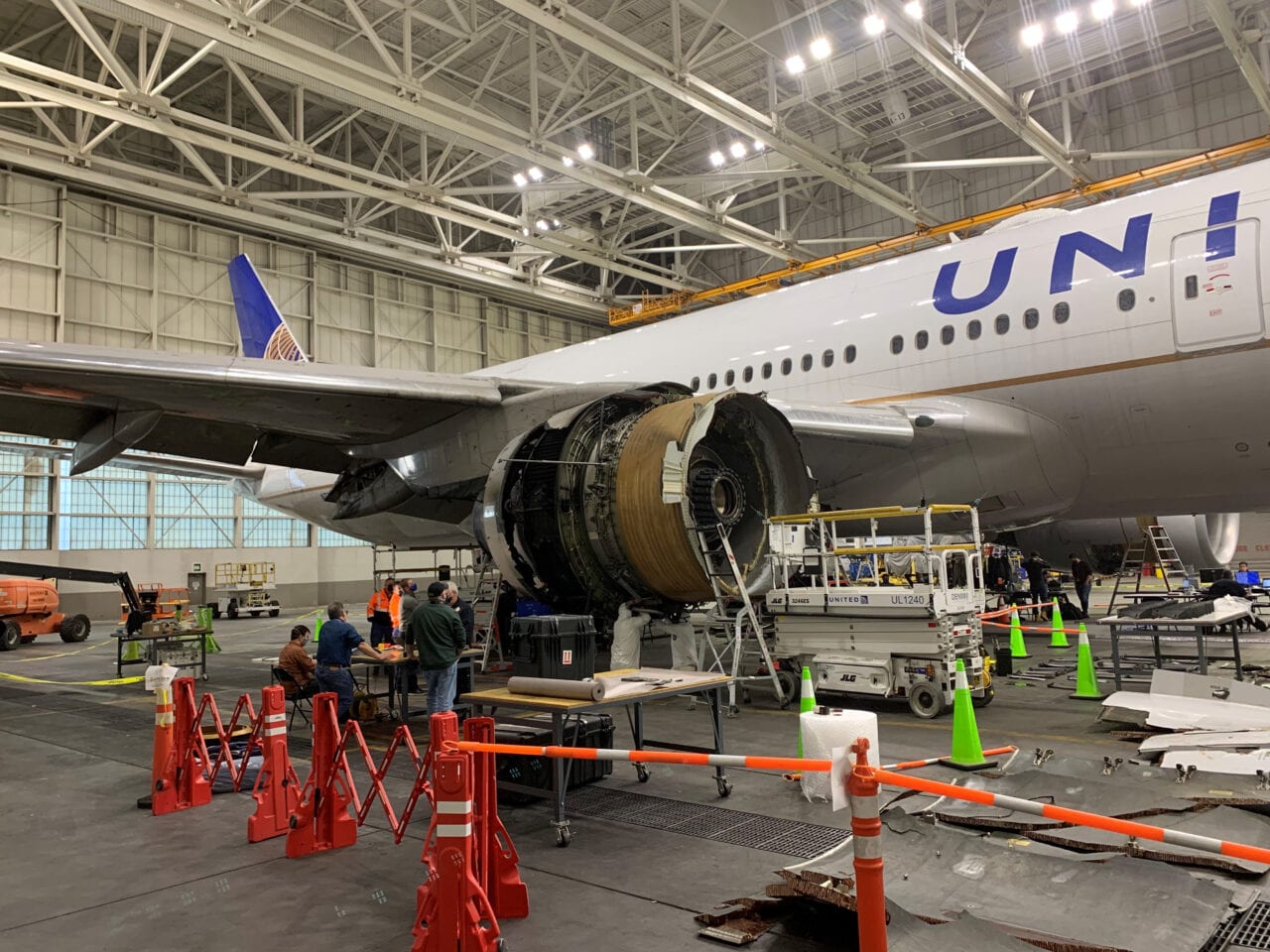 This image taken Feb. 22, 2021, shows the damage to the number 2 engine of United Airlines flight 328, a Boeing 777-200, following an engine failure incident Saturday. The NTSB is investigating the incident. United Airlines flight 328 experienced a right engine failure after takeoff from Denver International Airport Feb. 20, 2021. The airplane returned safely to Denver; none of the 229 passengers or 10 crew members were injured. (NTSB)

Damage to two turbofan blades involved in the in-flight engine failure on United Airlines (UAL) flight 328 are among the initial discoveries in focus by a team of investigators reviewing the incident that occurred shortly after takeoff from Denver International Airport en route to Honolulu, Hawaii Saturday Feb. 19.

UAL 328, a Boeing 777-200 carrying 229 passengers and 10 crew members, experienced the engine failure and in-flight fire that went viral in a video on social media posted by a relative to one of the flight’s passengers. The aircraft circled back to DIA once pilots discovered the failure. None of the passengers or crew were injured, and a team including the U.S. National Transportation Safety Board (NTSB), Federal Aviation Administration (FAA), United Airlines, Boeing, Pratt & Whitney, the Air Line Pilots Association, and the Independent Brotherhood of Teamsters are now investigating it.

NTSB Chairman Robert Sumwalt said that the agency’s preliminary analysis of the engine shows that two of its individual fan blades were damaged. Sumwalt explained how Boeing 777-200 model’s engine, Pratt & Whitney’s PW4077, has 22 fan blades that join together into a hub inside of the containment ring and housed by an exterior cowling—which fell off the aircraft along with other debris from the 777 as it returned to DIA. 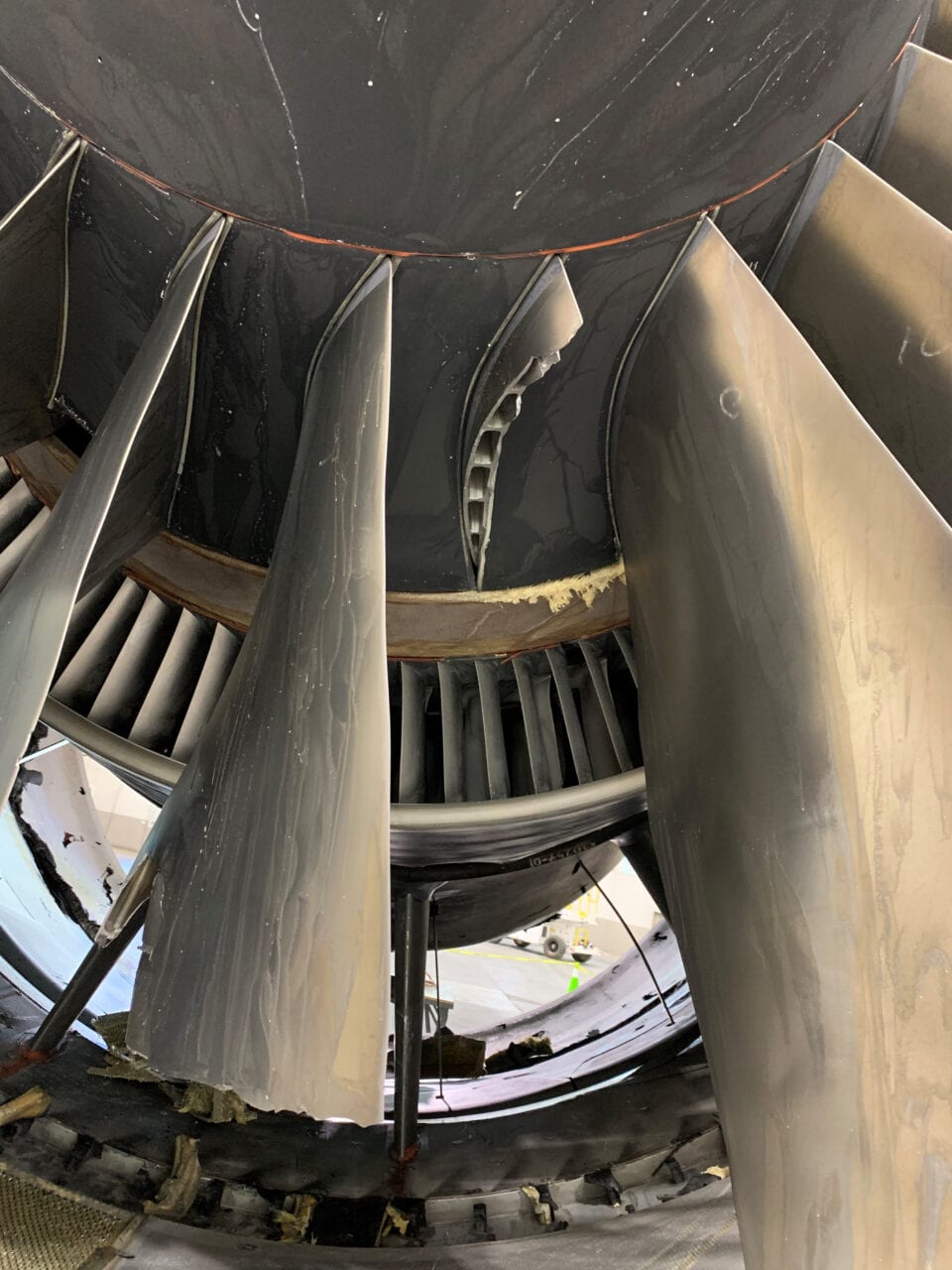 An up-close shot shows the damage to fan blades in the number 2 engine of United Airlines flight 328, a Boeing 777-200, following an engine failure incident Saturday. (NTSB)

Damage was also discovered along the tips and leading edges of the remaining fan blades featured on the PW40777 model engine.

The aircraft suffered damage to the area underneath the left wing where the wing joins the body accompanied by a composite fairing underneath the wing that helps improve the aircraft aerodynamic performance. Sumwalt described this as “minor damage,” and noted that NTSB discovered other minor dings and nicks along other areas of the wing but at this time his team has not discovered any structural damage.

Sumwalt also does not believe at this stage of the investigation that the engine fire which was caught on video could be categorized as an “un-contained engine failure.”

“We, by our strictest definition do not consider this to be an un-contained engine failure, because the containment ring contained the parts as they were flying out. From a practical point of view to the flying public it really doesn’t matter whether or not we technically call it that or not,” Sumwalt said.

Both the cockpit voice and flight data recorders have been flown to Washington D.C. where NTSB will be reviewing data recovered from each to help gain a better understanding of what caused the engine failure. The piece of the fan blade that was recovered from the Broomfield soccer field is being flown via private jet to Pratt & Whitney for further review at its laboratory in collaboration with NTSB.

A 777 operated by Japan Airlines (JAL) on Dec. 4 powered by the same PW4000 engine model also experienced  trouble, although Sumwalt said investigators are not yet sure if the two incidents are related. That incident and the UAL 328 engine failure lead to the Japan Civil Aviation Bureau issuing a suspension of all 777 aircraft powered by that engine type on Feb. 20. 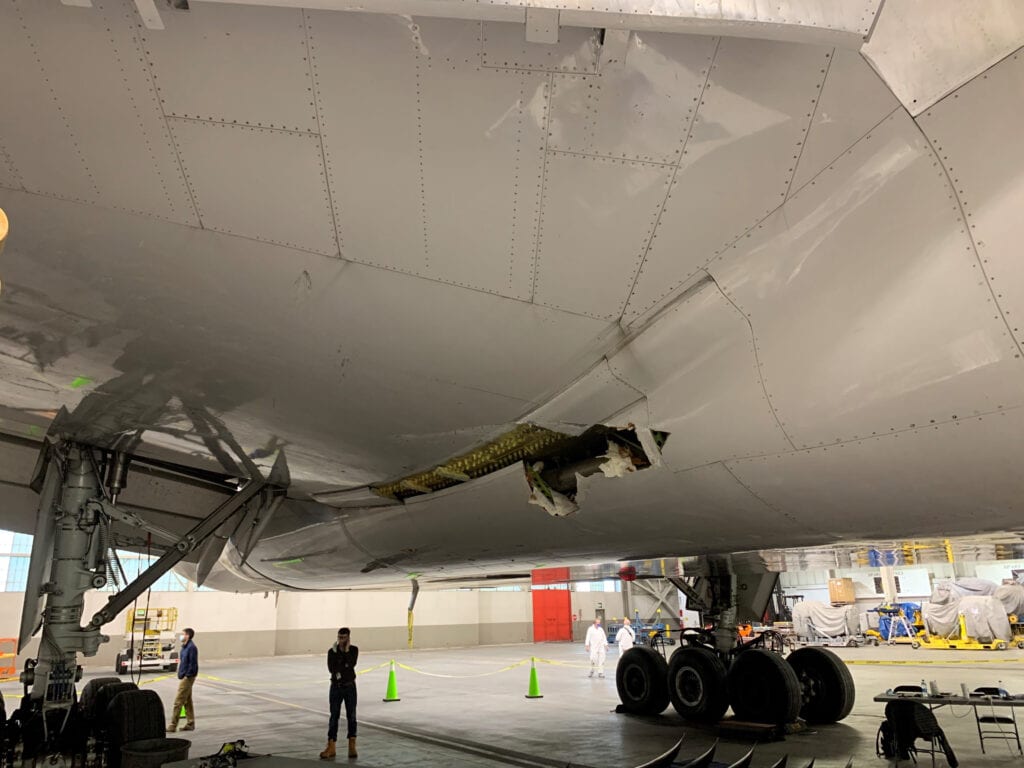 This image shows the damage to the wing and the body fairing of the United Airlines flight 328 Boeing 777-200. (NTSB)

“We reviewed all available data following yesterday’s incident. Based on the initial information, we concluded that the inspection interval should be stepped up for the hollow fan blades that are unique to this model of engine, used solely on Boeing 777 airplanes,” Dickson said.

Boeing released a statement the same day recommending flight operations for all 69 in-service and the other 59 in-storage 777s powered by the 4000-112 model engines be suspended immediately.

“Boeing supports the decision yesterday by the Japan Civil Aviation Bureau, and the FAA’s action today to suspend operations of 777 aircraft powered by Pratt & Whitney 4000-112 engines,” Boeing said in the UAL 328 statement. “We are working with these regulators as they take actions while these planes are on the ground and further inspections are conducted by Pratt & Whitney.”

In a series of tweets, United Airlines explained its decision to remove all 24 of its 777s powered by Pratt & Whitney 4000 series engines from its schedule.

“We are voluntarily & temporarily removing 24 Boeing 777 aircraft powered by Pratt & Whitney 4000 series engines from our schedule,” United said. “We will continue to work closely with regulators to determine any additional steps and expect only a small number of customers to be inconvenienced.”