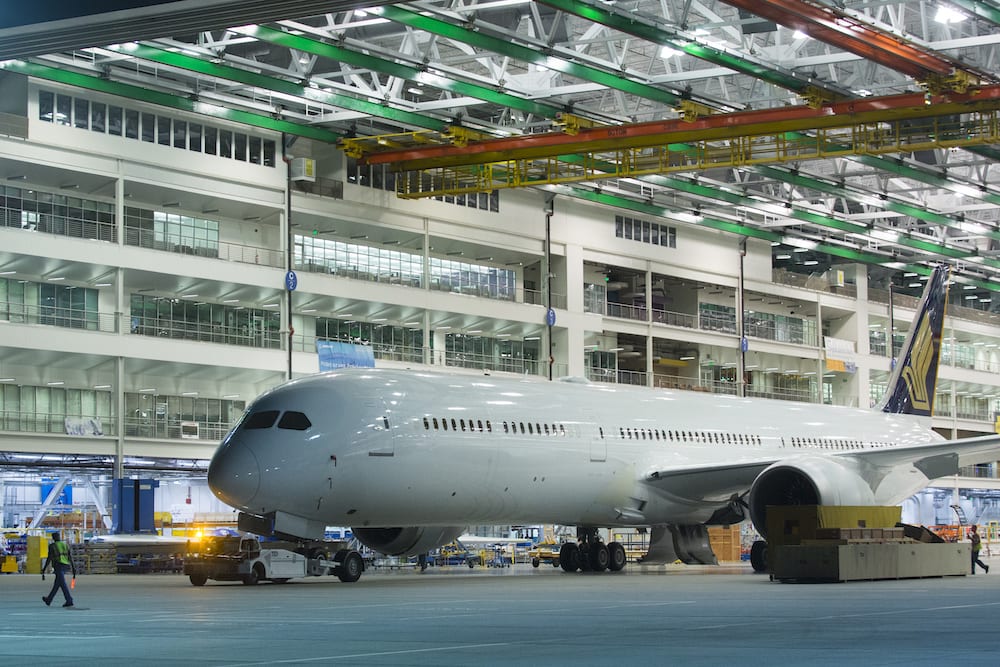 Boeing is temporarily halting deliveries of its 787 Dreamliners, pictured here is the first Singapore Airlines 787-10. (Boeing)

Boeing is temporarily lowering the production rate for its 787 Dreamliner and halting deliveries of its flagship wide-body jet to address a newly discovered manufacturing issue.

The new issues involve small gaps identified in the forward pressure bulkhead, a representative for Boeing told Avionics International. This will be the second delivery stoppage of the twin-aisle airliner in less than a year, after Boeing stopped delivering the 787 between November 2020 and late March to address previously discovered issues with composite skin flatness and small gaps discovered between sections of the fuselage.

Boeing temporarily paused deliveries of the 787 again in May after the Federal Aviation Administration (FAA) sought more information and data about its verification process for the aircraft’s fuselage. Since then, Boeing delivered one 787—that had been cleared for delivery several months before the FAA’s inquiry— to Turkish Airlines.

“As Boeing has previously shared, the company has been engaged in detailed discussions with the FAA on verification methodology for 787 fuselages, and conducting associated inspections and rework,” Boeing said in a July 13 press release. “In connection with these efforts, the company has identified additional rework that will be required on undelivered 787s. Based on our assessment of the time required to complete this work, Boeing is reprioritizing production resources for a few weeks to support the inspection and rework.”

The airframe manufacturer is also temporarily reducing the production rate for the 787 to less than five per month while the inspection and rework process is completed for the undelivered aircraft. Boeing also now expects to deliver less than half of the 787s currently in its inventory this year.

In an emailed statement, a representative for the FAA told Avionics that the 787s will be fixed before deliveries resume.

“The FAA is aware of a manufacturing quality issue near the nose on certain 787 Dreamliners in the company’s inventory of undelivered airplanes. This issue was discovered as part of the ongoing system-wide inspection of Boeing’s 787 shimming processes required by the FAA,” the representative said. “Although the issue poses no immediate threat to flight safety, Boeing has committed to fix these airplanes before resuming deliveries. Based on data, the FAA will determine whether similar modifications should be made on 787s already in commercial service.”

Boeing also reported its second-quarter delivery numbers on Tuesday, completing a total of 79 commercial aircraft deliveries between April and May, 50 of which were 737 MAX jets. The company has delivered 14 total 787 Dreamliners this year.