November 4th, 2020   •   Comments Off on Bye Aerospace Gets Investment from South Korean Aerospace9 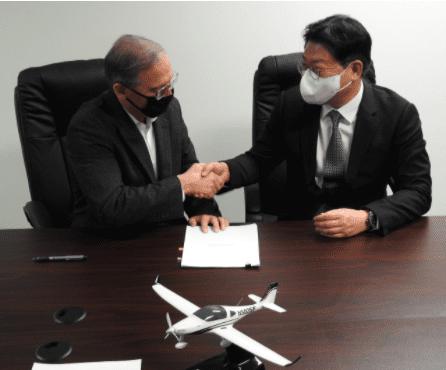 George Bye, CEO of Bye Aerospace, and Seunghyuk Cha, Chairman of Aerospace9, agreed to a purchase agreement for 300 aircraft.

Aerospace9, an information and technology company based in South Korea, has agreed to purchase 300 of Bye Aerospace’s all-electric aircraft, according to a Nov. 2 press release. The agreement marks an important opportunity in the Asia Pacific market, George Bye, CEO of Bye Aerospace, told Avionics International.

Bye Aerospace, a Colorado-based aircraft manufacturer, is currently in the Federal Aviation Administration’s (FAA) certification process for its all-electric trainer eFlyer, which comes in two and four-seat options. Bye said he expects this process and production to start in the third quarter of 2022. The original date of 2021 was pushed back because of COVID-19.

Aerospace9 will be purchasing a total of 150 eFlyer 2s, the two-seat variation, 148 eFlyer 4s, the four-seat variation, and two Envoys, which is Bye Aerospace’s soon to be announced 9-seat variation, according to the release. It will also have the opportunity to acquire 100 additional aircraft.

“This investment is not just a purchase contract, it is a very meaningful contract that creates an amazing opportunity for Asia,” Chairman Seunghyuk Cha of Aerospace 9, said in a press statement. “Our company has a very important responsibility in the aviation industry as a new strategic partner of Bye Aerospace.”

Bye Aerospace’s prototypes, fixed-wing all-electric aircraft produced under Part 23 Amendment 64, were initially rolled out four years ago. They use lithium-ion battery cells for power lasting between three to five hours depending on the aircraft configuration. The eFlyer is a trainer aircraft, which negates the need for longer flight times, Bye said.

“The cell goes into a module, which provides thermal management mechanical protection and safety systems and those battery packs, there are two strings that have battery packs completely redundant one to the other, that provide the energy for the battery management system,” Bye explains.  “It’s basically a computer that monitors the health and the state of charge and so forth and those electrons feed the electric energy into the controller inverter and electric motor, and that system is designed for a three-hour flight time on the two-seat eFlyer 2.”

In July Bye Aerospace announced a $10 million investment by a venture capital fund which allowed it to begin work on the first production-conforming prototype of its eFlyer 2 aircraft. The SUBARU-SBI Innovation Fund also invested in the company in 2018.