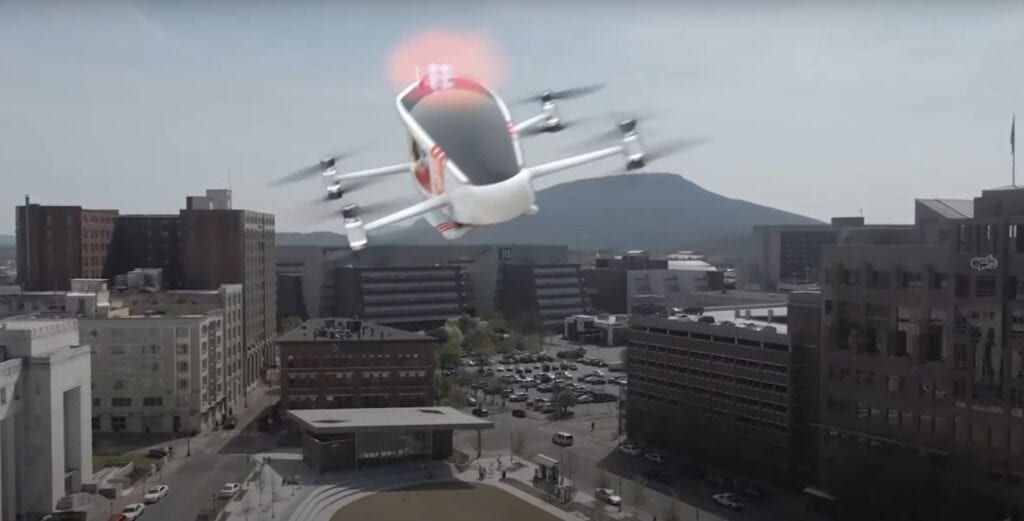 EHang joined ICAO’s Ambular project, which is exploring eVTOL use for medical transport, as its first hardware supplier. (Ambular)

Launched in 2018, Ambular seeks to develop a prototype aircraft that will be open-sourced, rather than built and sold as a commercial product, as well as to demonstrate that electric vertical takeoff and landing (eVTOL) aircraft can be affordably and responsibly used for emergency medical response purposes. As the project’s first hardware partner, EHang will provide rotors and motors, and potentially other necessary hardware, to aid in the design of an aircraft intended to be provided open-source to whomever wants to use it.

Ambular is currently in the early phase of its second design cycle, according to Yuri Fattah, lead guide for the team at ICAO. One academic partner, the Hong Kong University of Science and Technology, is using computational fluid dynamics and a wind tunnel to contribute on the design’s aerodynamics, while Concordia University’s Gina Cody School of Engineering and Computer Science is working to include a digital twin of the aircraft in its unmanned traffic management simulator.

“Based on the results of those analyses, we will start finalizing the next iteration of the Ambular, which will then be the basis for a ¼-scale prototype that we hope to have ready in the next 4 to 5 years,” Fattah told Avionics International. “At that time, we will have a clearer understanding of what other hardware will be provided to the project and by whom.”

Fattah added that EHang is currently the project’s only hardware contributor, and it has not yet been decided whether Ambular will move on to a full-scale functioning prototype after sub-scale testing. Other partners include Imaginactive, a engineering concept firm owned by Charles Bombardier, and the Second Research Institute of the Civil Aviation Administration of China.

“The aim is to demonstrate that the use case — that of an eVTOL ambulance — can be realized in a manner that is affordable and socially responsible (including with respect to the environment),” Fattah said. “That might be a bit of a moonshot but we hope that many issues, both technical and otherwise, will be solved through the collective work on this singular problem. And we definitely believe that we will also have a working prototype that demonstrates that we can reach our goal.”

A presentation on Ambular’s progress given during last month’s virtual Farnborough International Airshow proposed using four sets of rotors placed around a central cockpit to transport one patient and one paramedic. The next phase of design anticipates accommodating two paramedics and one patient.

The presentation featured an eVTOL aircraft much like EHang’s two-seat 216 flying to the scene of an accident, in the middle of a city street, and taking off again to transport the patient to a hospital.

“AI sorts location, assigns vehicle and allocates nearest paramedic. AI also handles the commute which is controlled by a pilot remotely in a command center. The paramedic takes over command if an issue arises,” the presentation stated.

Unlike some other “EMS eVTOL” projects, Ambular intends to transport patients to medical facilities as well as move paramedics to the scene of the accident. (Ambular)

Ambular is not the only project touting the potential of eVTOLs to safe critical minutes in emergency response situations. Jump Aero, led by former Terrafugia leader Carl Dietrich, is in the initial stages of designing a commercial eVTOL specifically for emergency medical use. Volocopter is nearing completion of an 18-month study in partnership with the ADAC Air Rescue Foundation to explore medical applications of its VoloCity aircraft.

However, both Jump Aero and Volocopter intend their aircraft solely to bring paramedics to the scene of an accident: not also for transporting a patient to a medical facility, as Ambular proposes.

EHang has previously demonstrated its aircraft’s applicability to medical transport by moving supplies a distance of four kilometers in the city of Hezou, along with a proposal to use the 216 for aerial firefighting. The company has also obtained a special flight operations certification from Transport Canada, announced a production facility in Guangdong, and partnered with a number of small European cities to implement urban air mobility.

In January, EHang published a white paper describing its approach to commercializing urban air mobility, with each two-passenger autonomous vehicle capable of generating $352,174 in annual revenue at a profit margin of 39 percent.

However, those figures assume a load factor above 90 percent and 6,000 hours annual utilization, meaning the aircraft is expected to be flying passengers an average of 20 hours per day — despite a stated charge rate of up to 120 minutes. EHang has not yet responded to inquiries from Avionics International regarding these figures and its business case.