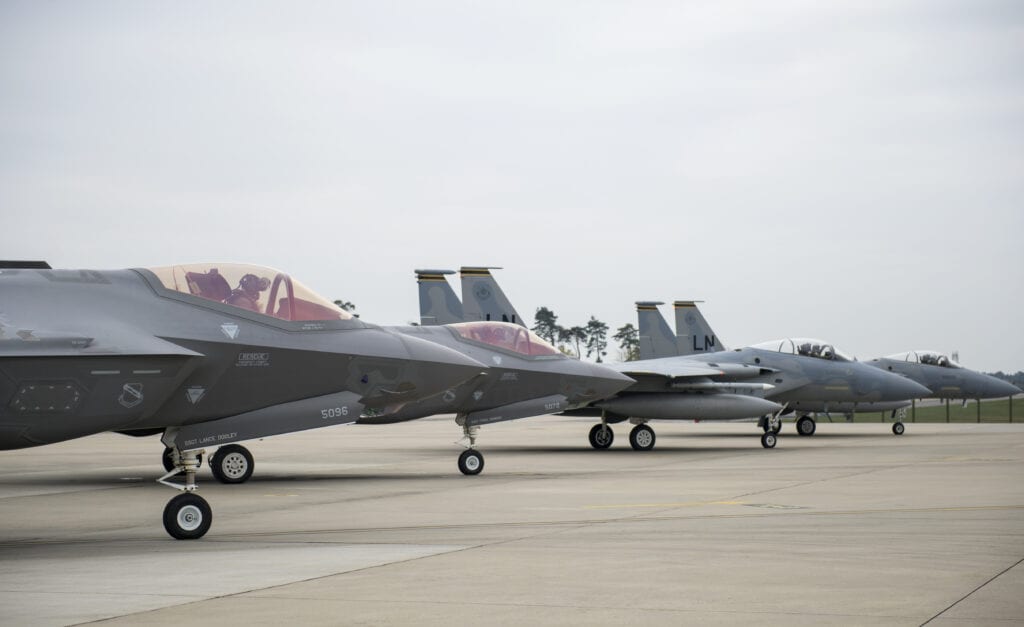 According to a new report published by the U.S. European Command, aircraft that complement and enhance the unique capabilities of the F-35 will be a key strategy for the future of European North Atlantic Treaty Organization (NATO) air combat capabilities to deter Russian aggression.

The report, “At the Vanguard: European Contributions to NATO’s Future Combat Airpower,” features research  conducted by the RAND Corporation, a think tank, and looked at European air forces’ vulnerabilities and Russia’s concern over NATO’s advantage in the air domain.

“In the opening days of a notional conflict, the F-35’s stealth and sensor fusion will enable unprecedented situational awareness and the potential to acquire and service targets at rapid tempos,” the report states. “This will be impactful across the range of combat air missions, including for suppression of enemy air defenses (SEAD) in the early hours and days of a campaign and conducting counter-land operations to delay, damage, and destroy enemy maneuver forces.”

“Fourth-generation fighters—many able to wield greater firepower than their stealthier fifth-generation counterparts and still projected to account for about 70 percent of NATO’s inventory by 2030—will still constitute an important element of airpower. It is reasonable to assume that the Russian military would seek to disrupt this synergy during a conflict, particularly in light of recent Russian investments in EW [electronic warfare] capabilities,” the report states.

Positioning the fifth-generation fleet within range of Russia’s advanced air defenses will help enhance their effectiveness.

The report also recommends expanding the SEAD mission training program at Luke Air Force Base and creating trainer aircraft that can simulate F-35 capabilities. They would also need operational concepts for moving armored formations and to reduce predictability in aircraft servicing to create distributed operations with international cross maintenance practices. 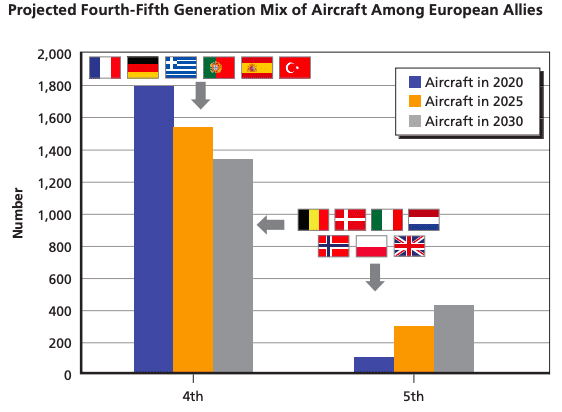 RAND analysis based on IHS Jane’s, the International Institute for Strategic
Studies (The Military Balance 2019), interviews, and open-source reporting. (RAND)

By 2030, 30 percent of European allies’ combat aircraft with be fifth-generation aircraft, according to the report. Allies will need to engage in more combined training and exercises to improve operational cohesion. Transparency for combat aircraft availability, which is not usually accessible, would also be necessary to spotlight maintenance and sustainment needs.

“Data on the mission-capable rates of European air platforms are not generally publicized,” the report states. “Public agreement by NATO leaders on standard availability objectives could provide renewed political and budgetary focus on efficient and adequately funded maintenance and sustainment. The recent U.S. nadir of an average overall 70-percent mission-capable rate might offer a reasonable NATO-wide objective.”

The U.S. and European air forces need to update F-35 program policies and procedures so they can work more effectively during training and operations, according to the report. They would need to distribute an updated F-35 interoperability policy for information sharing.

“At present, unclear and sometimes unnecessary restrictions on information sharing and planning stifle cooperation among air staffs and reduce their ability to adequately prepare for high-end multinational operations,” the report states.

“The degree to which European air forces acquire these technologies will directly impact their ability to contribute to the range of combat air missions expected in a high-intensity conflict,” the report states. “At the same time, reliance on the F-35 for combat ISR functions previously performed by longer-range, ISR-dedicated standoff aerial systems (e.g., RC-135W River Joint, E-8 Sentinel, and E-3 Sentry) raises the question of capacity and prioritization alongside other demands such as SEAD [Suppression of Enemy Air Defenses], counter land operations, and air defense.”

The goal of these advancements is to enhance deterrence. While the report acknowledges a scenario where an imbalance is created between Russian ground forces and NATO air forces, it concludes that strong NATO air offenses would still end in deterrence.

“One common scenario considers a calculation by the Russian government that Russia could leverage a regional imbalance in ground forces to occupy some slice of NATO territory, employ air defenses to stave off allied air forces, present a fait accompli similar to that seen in Crimea, and politically divide NATO by calling for negotiations,” the report states. “The ability of European fifth-generation fighters to penetrate Russian air defenses and make significant combat contributions from the opening hours of a response—at the vanguard—would most likely challenge the logic behind this scenario, improving deterrence by increasing the Russian risks associated with this approach.”