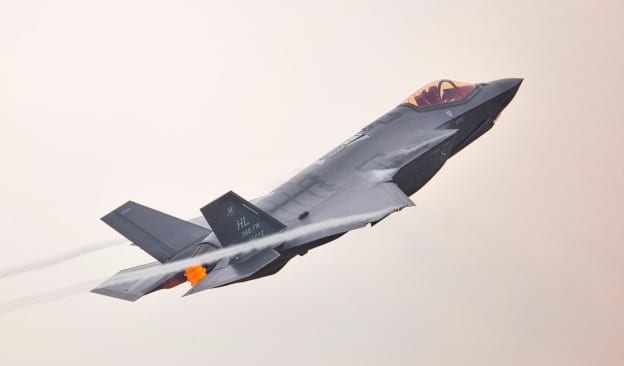 F-35 deliveries have resumed after a temporary pause due to damage discovered on a system that protect’s the fighter jet’s engine from lightning strikes. Photo: Lockheed Martin

The contractor of the U.S. military’s F-35 Joint Strike Fighter paused deliveries in early June for three weeks to investigate damage on the system that protects the aircraft’s engine from lightning strikes, but has since resumed deliveries.

Damage was discovered on a tube of an F-35A’s Onboard Inert Gas Generation System, or OBIGGS, during a routine maintenance check at Ogden Air Logistics Complex at Hill Air Force Base, Utah. F-35 manufacturer Lockheed Martin  said in a June 24 statement that the company initiated a delay in deliveries to verify that production was conforming to the specifications of OBIGGS installation. The system generates nitrogen-enriched air in the aircraft’s fuel tanks to render them inert in the case of a lightning strike.

Bloomberg News first reported Wednesday on a June 5 memo detailing the halt in deliveries, which also stated that 14 of 24 Air Force F-35 models had been inspected.

“We are working with the F-35 Joint Program Office (JPO) on a root cause corrective action investigation to determine next steps, as it appears this [OBIGGS] anomaly is occurring in the field after aircraft delivery,” Lockheed Martin said in a statement. “As a safety precaution, the JPO recommended to unit commanders that they implement a lightning flight restriction for the F-35A, which restricts flying within 25 miles of lightning or thunderstorms.”

Meanwhile, the House Oversight Committee wants answers from Lockheed Martin to explain its failure to deliver parts that are ready for installation, and requests a number of documents from the company’s leader by the end of the month.

The committee sent a June 18 letter to new Lockheed President and CEO James Taiclet saying it is ” investigating Lockheed Martin’s failure to deliver spare parts to the Department of  Defense (DOD) that were ready for installation on the F-35 aircraft.”

“During a recent Committee briefing and multiple bipartisan staff delegations to military bases with F-35s, the Committee learned troubling information about  how unresolved issues with F-35 spare parts lead to excess costs for the military because DOD must divert personnel to troubleshoot these issues and use extensive workarounds to keep F-35 planes flying,” the letter said.

The Defense Department has spent more than $300 million in added labor costs since 2015, and must pay $55 million per year if Lockheed Martin cannot resolve them, the lawmakers quoted the DoD Inspector General as reporting. From December 2015 to June 2018, DoD personnel submitted more than 15,000 requests related to defective spare parts to Lockheed Martin.

This article was originally published in Defense Daily, a sister publication to Avionics.