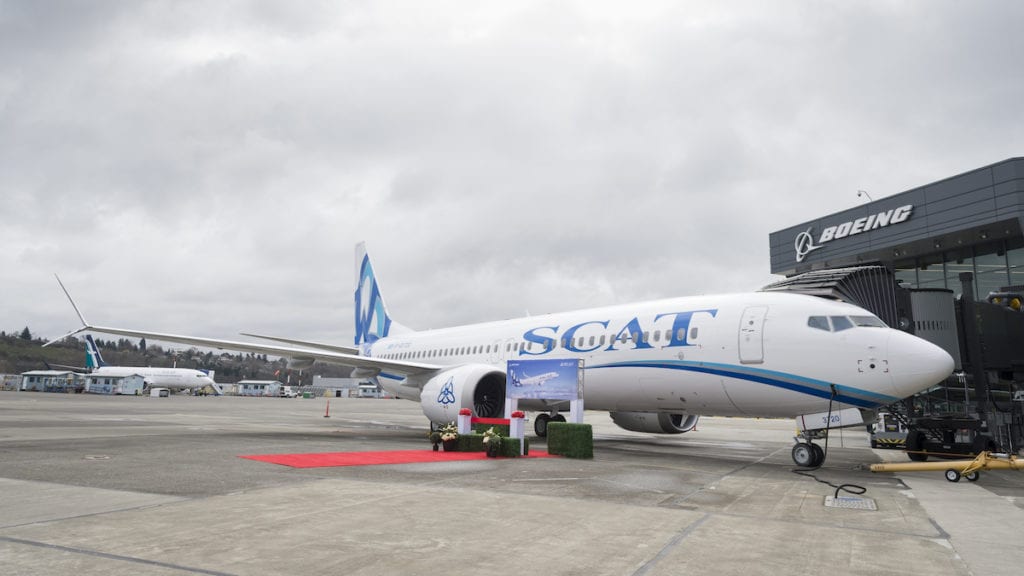 There is still no clear timeline on when Boeing’s 737 MAX will return to passenger carrying service, as lawmakers learned during a June 18 hearing with FAA Administrator Stephen Dickson. Pictured here is the first 737 MAX for SCAT Airlines delivered to carrier in March 2018. Photo: Boeing.

The Federal Aviation Administration (FAA) will hire more software and systems engineers, human factors experts and other technological subject matter experts as a way of improving how the agency certifies increasingly complex avionics and other systems into the future, after a review of how the 737 MAX was certified showed the need for more personnel with new skill sets.

Boeing resumed 737 MAX production on May 27, although the aircraft remains grounded with a return to commercial service still uncertain. FAA Administrator Stephen Dickson discussed changes the agency plans to make to its process for certifying complex flight control and other aircraft systems, as well as the way it will assess such technology, during a Senate Committee on Commerce, Science and Transportation hearing on Wednesday.

“Our aviation safety organization has a 10-year workforce plan. We’re in the process of reviewing our needs and we will have a focus on human factors experts, systems engineers, software engineers, data scientists so we can stay ahead of new technologies as they’re introduced,” Dickson said.

Dickson’s comments show swift action by the agency to add experts with newer technological skill sets, a key recommendation featured in the January report published by the independent special committee tasked with reviewing the certification process followed by the FAA and Boeing for the 737 MAX program.  The report recommended a transformation of the FAA’s Aircraft Certification Service (AIR), to include hiring personnel with backgrounds in data analytics, systems engineering, operations research and program management to keep pace with the growth in complexity of new certification projects.

In February, the FAA published its 2021 budget request, $17.5 billion, including $10 million assigned to adding 50 new technical employees. This would be the first phase of an increased hiring effort, as the agency actually expects to need a total of 236 new safety critical and safety technical positions.

There will also be increased coordination between the FAA’s flight standards division and AIR in future certification projects. Another change from the agency is a focus on integrating the FAA’s aircraft evaluation group pilots into the overall certification process earlier. Pilots from the evaluation group are to start receiving more training on system safety assessments and certification procedures so that they have more visibility over the type of issues maneuvering characteristics augmentation system (MCAS) presented to Ethiopian and Lion Air pilots.

FAA Administrator Stephen Dickson discussed changes the agency will make to the way it certifies complex aircraft systems in the future during a Senate hearing on Wednesday, June 17. Photo: C-Span

Overall, changes to the certification and safety assessment processes are also designed to allow the FAA and manufacturers to produce certification data and criteria in under more holistic integrated aircraft systems approach, rather than the independent view that has been used in the past.

“Bolstering our human factors expertise, so there is a workforce component, in addition to working with academia and NASA on these issues, involving our pilots and our flight standards group, aircraft evaluation group into the cert process at an earlier and more integrated point, in the process will allow us to take a more holistic view of the role of the human in aircraft design,” Dickson said.

There was also some discussion during the hearing about the return of the 737 MAX to passenger carrying service, which the FAA chief repeatedly told administrators does not have a timeline, but will rely on the agency’s determination of whether the software updates introduced by Boeing last year address known issues with the MCAS system. In April, Avionics learned that the re-certification program for the MAX was waiting on a certification flight and a software validation effort associated with a modification to the MAX’s flight control computer that is not associated with MCAS.

Two features involving the computer’s microprocessor and autopilot engagement are the focus of the software validation effort. COVID-19 has not had an impact on the ability of regulators to review the software modification or pilots to test fly the MAX, however Dickson told the committee that the review continues not only because of the MCAS system, but because Boeing is essentially modifying the entire flight control system.

“There’s much more redundancy, the flight control computers in pitch compare their signals dynamically that’s an extremely ambitious project, as we have moved forward when you make a system like that more robust what happens is it implicates interdependences with other sub systems on the aircraft that have to be taken into account,” Dickson said. “We’ve moved forward diligently and affordably and have maintained we will issue the airworthiness certs ourselves, that’s why this has been such a journey we’ve been on.”