May 30th, 2020   •   Comments Off on First Flight of MagniX eCaravan Showcases Maturity of Electric Aviation 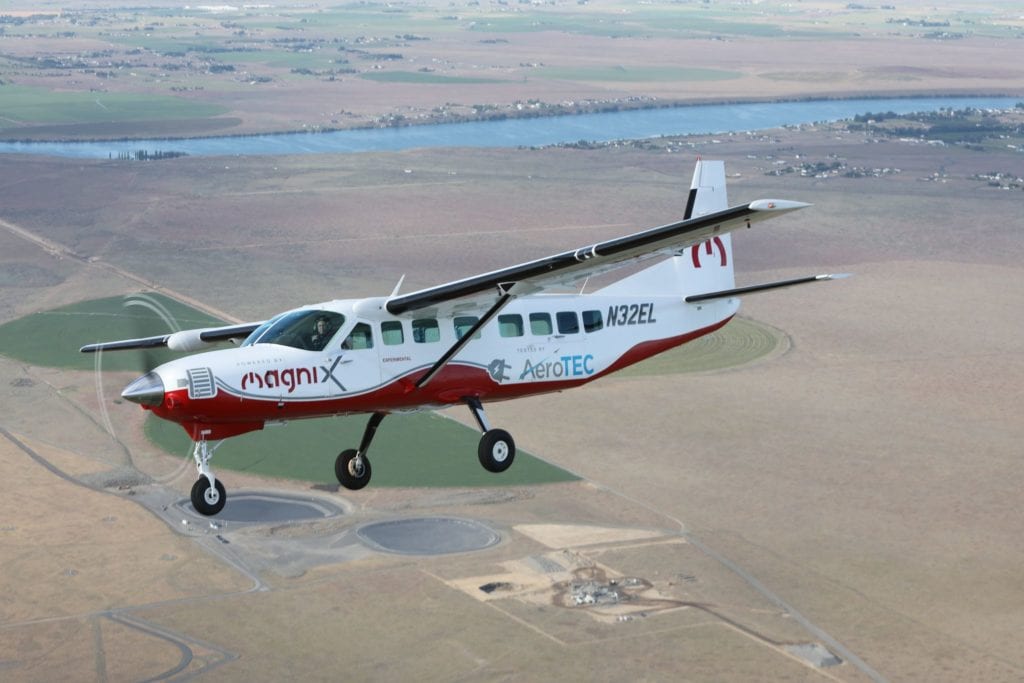 Though SpaceX was forced to scrub its historic launch this past Wednesday — the first transport of humans to space from American soil since 2011 — the sky was all-clear for Redmond, Washington-based MagniX’s first flight of the largest all-electric commuter aircraft yet.

Working with Seattle-based AeroTEC, the electric motor startup retrofitted a Cessna 208B Grand Caravan with its 750-horsepower Magni500 propulsion system. The “e-Caravan” took off from AeroTEC’s flight test center at Moses Lake and flew for thirty minutes, climbing up to 2,500 feet and performing “flawlessly,” according to Steve Crane, chief test pilot for AeroTEC.

“What everyone is hearing here is the Cessna 182 chase plane,” MagniX CEO Roei Ganzarski said during the live-stream. “The Caravan is hardly making any noise; it’s actually pretty amazing.”

The choice of the Caravan was intentional, according to Ganzarski; it’s a widely-used airframe for both passenger and cargo transit that is still in production and has logged more than 20 million flight hours. And the eCaravan’s first flight — which took off on time, landed on time, and retained ten percent more energy capacity than MagniX and AeroTEC expected it would — was intended to demonstrate “how mature [electric propulsion technology] is and how ready for the world it is.”

“For us, this was really about taking something practical, something real … the Cessna Caravan is one of the most widely-used middle-mile aircraft. It’s a phenomenal platform,” Ganzarski said. “The only challenge a lot of operators have with it is the engine up front, which guzzles a lot of gas, creates a lot of emissions, needs a lot of maintenance and costs a lot of money per hour to operate.” 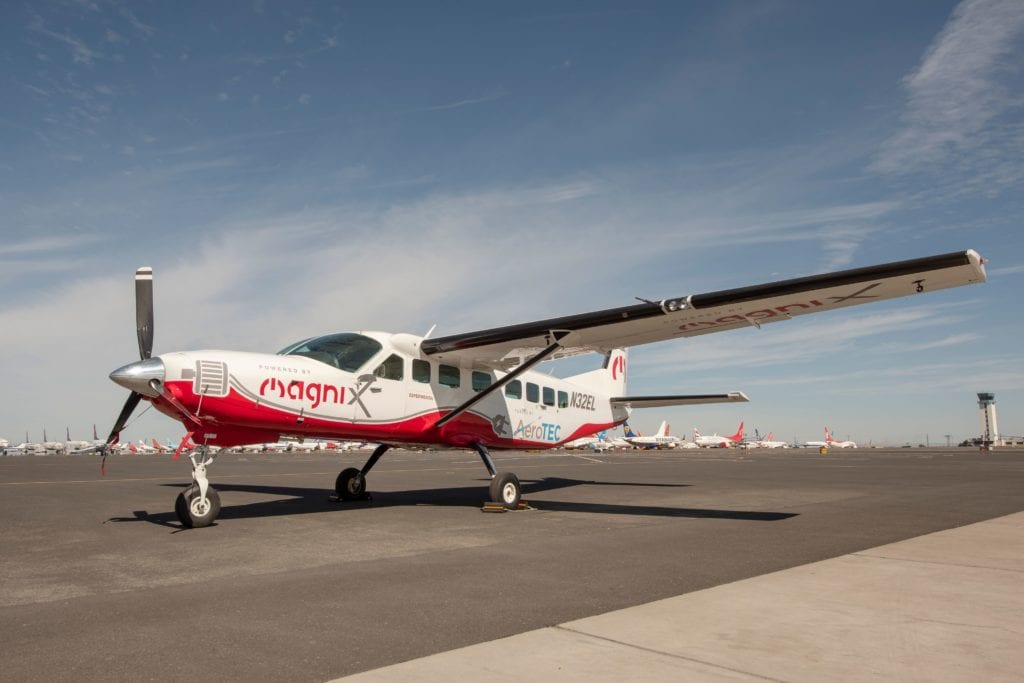 Another close-up of the modified Cessna 208B Caravan. (MagniX)

Ganzarski believes an electric version of the Caravan would reduce operating costs by 40-80 percent per flight hour, significantly changing the routes operators are able to fly with it. The thirty-minute test flight, which would normally consume jet fuel exceeding $300 in cost, used less than six dollars’ worth of electricity, according to Ganzarski.

“Imagine what that does … to the bottom line or profitability of an airline,” Ganzarski said. “Now they can fly from and to airports and on schedules that they couldn’t have imagined before. Now, they don’t have to justify filling 70 percent of their seats flying into a major airport because that’s the only way to make a few percentage points in earnings.”

In addition to lower fuel costs, the use of electric motors is expected to significantly reduce maintenance costs, eliminating the need for extensive engine overhauls every 3-4,000 hours of operation. Not addressed by MagniX and AeroTEC were the costs involved with battery pack degradation and the need to purchase and swap in a new energy storage system, which analysts expect to be a weighty expense for electric aviation.

Of course, the limited energy density of batteries also comes with significant drawbacks in aircraft performance. The e-Caravan — built with “2019 batteries,” according to Ganzarski — could carry four to five passengers a range of just one hundred miles. By the time MagniX receives FAA certification for its electric propulsion system, which the company expects by the end of 2021, he believes the aircraft will be able to carry “a full load” that distance.

“We’re also working with different types of battery and power sources,” Ganzarski said. “We’re working with lithium sulfur technology companies, solid state battery technology and hydrogen fuel cell. From that perspective, the MagniX propulsion systems are, I’ll call them ‘electron-agnostic.’ Whether the power comes from a battery of any type of chemistry, a fuel cell, or in fact a generator that’s fuel-based, we can take those electrons, turn them into torque, and allow the aircraft to be propelled electrically.”

Lee Human, founder and CEO of AeroTEC, which served as aircraft expert and integrator, said the modification resulted in a much simpler aircraft with fewer parts — and MagniX’s propulsion system is “from an architectural standpoint, the most reliable, redundant propulsion system that I’ve ever seen.”

“The battery architecture — you have basically four channels of power, which can handle failures,” Human told reporters after the flight. “When you go through the magnet controller systems, there are two separate channels. There are two controllers, each one has two channels of control. There are two battery management units, and then even the motor itself is a four-channel system; you have two motors, each motor controlled with two different channels of signal.

“That kind of redundancy, reliability, safety is also new, versus the classic motor that has many single points of failure,” he added. “And they do fail, which is why most airplanes have two engines on them. This is completely different. This power propulsion system can tolerate lots of failure and still be completely operational.”

For AeroTEC, which has engineering offices in Seattle and a flight test center at Moses Lake, electric aviation is very much the company’s future.

“Roei and I, when we decided to launch this together … it’s obvious to everyone that electrification is the future. The systems we have today for flight — jet engines and the like — it’s just not sustainable. It’s there because we have no other choice. Well, today we have another choice … [and] we are going all in for electric flight development testing and certification here at Moses Lake,” Human said, adding that his company has other collaborations upcoming with Israeli startup Eviation, developer of the Alice commuter aircraft.

This is the second all-electric aircraft MagniX has retrofitted and flown in the past six months. Last year, the electric motor startup worked with Vancouver, Canada-based seaplane operator Harbour Air to modify a six-passenger DHC-2 de Havilland Beaver, which flew in December. The two companies have partnered to electrify Harbour Air’s entire fleet.

Leaders in this field see room in the future of sustainable aviation for battery-electric, hydrogen fuel cell and other solutions for various types of aircraft and missions.

“Energy storage solutions suitable for a given mission profile are dependent on a wide range of factors that go beyond just the mission, but also include customer needs and vehicle scale (e.g. small drone vs long range commercial jet),” Zach Lovering, founder and CEO of electric fixed-wing startup Aera Aircraft, told Avionics. “Currently, small drone and passenger eVTOL applications are dominated by battery storage. Several companies are looking to hydrogen for higher endurance, however there remain many safety and certification hurdles ahead for those systems.

“Fuel cells offer potentially high specific energy, but suffer from poor specific power and efficiency. Given these trades, it’s clear that the right solution will be dependent on the vehicle and its mission,” he added.”

“In the next 20 years we will see high specific energy battery cells that are currently in the lab move into certified aircraft,” Lovering told Avionics via email. “These cells will allow eVTOLs to have enough range to satisfy local flights in all-weather (IFR) conditions and will enable electric regional IFR flights with fixed wing airplanes. Likewise, I foresee hybrid electric aircraft being able to satisfy long range flights and improve their operational flexibility and economics.”

Early applications of electric aircraft will be heavily constrained by battery density — and face significant supply chain challenges — but MagniX’s Ganzarski says there is a market, though he wouldn’t discuss the company’s order book.

Electric jets are further in the future, with startup Wright Electric, working on 1.5-megaWatt motors to power a 186-seat zero-emission passenger jet, aiming for entry into service in 2030.

But fully-electric retrofits of widely-used airframes like the Caravan may begin to impact aviation within just a few years. And once passengers experience the quiet, emissions-free reality of electric flight, they may begin to demand it.

“If you look at the airline data for last year, five percent of all worldwide airline flights were a hundred miles or less. So the demand is clearly there,” Lovering said. “We’re talking about two million flights or more, depending on if you include cargo and sub-regional … and we start [using electric aircraft] in that range and grow from there.”