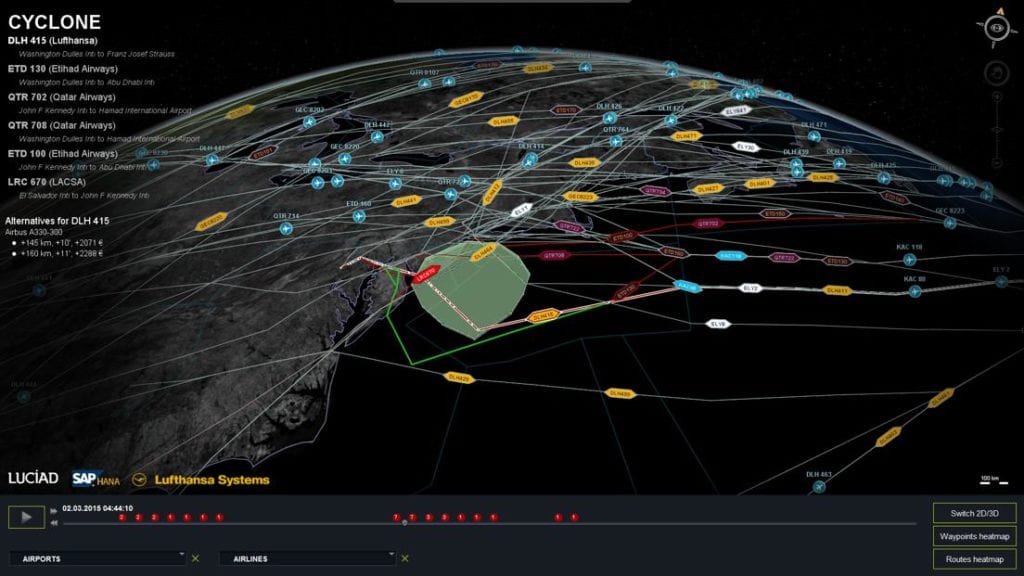 A display of alternative Lufthansa flight paths to avoid a cyclone and other airline flight paths is shown during an Apr. 23 Avionics International webinar sponsored by Hexagon AB.

While global flight traffic has dropped significantly due to the COVID-19 pandemic and a timeline for the return to last year’s level of 39 million flights is uncertain, airlines looking for illumination on their flight data may find it in the Luciad Portfolio by Sweden’s Hexagon AB.

“There is a wide diversity of data types, formats and structures that need to be brought together to realize a safe flight environment,” Sebastiaan Helsen, regional sales manager for Hexagon’s geospatial division,  said in an Apr. 23 Avionics International webinar, How to Exploit Real-Time Big Data to Optimize Aviation Operations: Cruising the Skies with Confidence.

Helsen outlined three use cases for big data: connecting hundreds of data types, analyzing information on the fly for smart decision making, and visualizing 2D and 3D data views in real time. By 2026, aircraft annual data generation will be 98 million terabytes, or roughly 5 to 8 terabytes per flight, he said.

The Luciad Portfolio works to integrate data aircraft speed and fuel consumption, real-time sensor information from radar and other tracking, aeronautical updates on changes in sectors and other factors, weather data, noise and pollution measurements, and flight plans and safety reports.

“Typically, you want to have access to the data as soon as possible for a variety of reasons,” Helsen said. “First of all, you want to make decisions in real time, but also if it takes too long before you can use the data..if you know there’s already new information, but you can’t use it yet because it’s still stuck somewhere in the process, that can be a real headache.”

“To rapidly and accurately exploit big data for aviation operations, there are two things we focus on with the technology in our Luciad Portfolio: to connect directly to data in its native format, especially for domain-specific formats, and the analysis and utilization that is done of the data should be done instantly as well in real time so you can use it and derive information from the data while it’s still relevant,” he said.

The flood of aviation data, the diversity of data sources and formats, and the speed of data transmission can complicate how aircraft effectively use data, but “the Luciad Portfolio was specifically designed to tackle these kinds of issues,” Helsen said.

For example, the portfolio can connect “to virtually any database in more than 200 data formats and real time data feeds,” and “you can easily add data formats” with the portfolio, he said.

A unified data model allows the portfolio to display the data in the same manner before it is given to the analysis or visualization piece of the technology. The portfolio incorporates a number of standards and geospatial formats – such as aeronautical formats such as AIXM, ARINC424, DAFIF and weather formats such as GRIB, NetCDF, and BUFR, and real-time data formats such as the ASTERIX group of Eurocontrol formats that define connections to radar feeds.

Airbus Defence and Space used the Luciad technology in the Collaborative Airspace Provision Service (CAPS) project that combined a wide variety of data to determine optimal flight paths and those that limited contrail formation. In December, 2014, the Single European Sky ATM Research (SESAR) named CAPS as the best in class solution in the System Wide Information Management (SWIM) category.

Lufthansa Airlines has also “integrated the Luciad technology in a product called Lido,” Helsen said during the Apr. 23 webinar.

Lido navigation is used as a flight planning tool among the 26 airlines in the Star Alliance, he said, while Lufthansa has said that more than 180 airlines use Lido FMS.