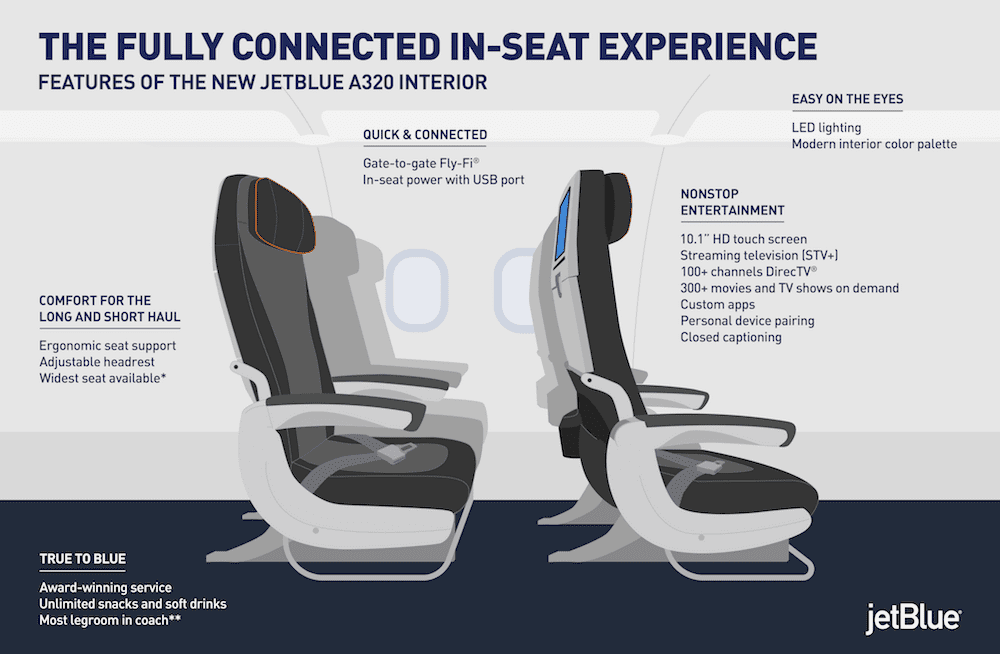 JetBlue CEO Robin Hayes said during a May 28 webcast hosted by the Washington Post that the cabin refresh of the airline’s fleet of A320s, pictured here, is still going to happen, but has been temporarily paused due to COVID-19. Photo: JetBlue

JetBlue CEO Robin Hayes said the New York-based airline is still on schedule to take delivery of its first Airbus A220 later this year and will continue the ongoing process of refreshing the cabin interiors on its A320 fleet is still happening through the uncertainty of the COVID-19 coronavirus pandemic.

During a webcast hosted by The Washington Post May 28, Hayes discussed the de-fogging, cleaning and restoring of passenger safety assuredness measures the airline is taking as passengers slowly start getting back on its airplanes. JetBlue will be one of the first airlines to receive an Airbus A220 assembled in the United States, after Airbus officially opened its new production facility in Mobile, Alabama last week.

“December this year sees the first arrival of one of our Airbus A220 airplanes, they’re a modern airplane, very fuel efficient. We’re going to be taking 70 of those over the next few years and those will gradually phase out our E-190s,” Hayes said

The low cost carrier first confirmed an order for 60 total A220-300s in June 2018, which included an agreement with Airbus for options on an additional 60 aircraft and the flexibility to convert some of its orders to the smaller A220-100, which has about 110 to 115 seats compared to the larger variant’s 130 to 140 seats.

The fleet retirement of JetBlue’s Embraer E-190 aircraft was already on schedule to begin this year, with no indication given by Hayes that would slip. One project JetBlue has had to temporarily pause due to COVID-19 is the updating of their A320 cabins. In March 2019, a plan for re-styling their A320 fleet was unveiled to include a new in-flight entertainment system and an new seating and power outlets installed at every seat.

Other improvements coming to the A320s include an upgrade to the Thales AVANT IFE system and ViaSat-2 connectivity.

“All of our A320s, we’re going through a cabin restarting, we’re replacing the interiors, all of those with new seats, new entertainment systems, so when you get in it’s going to look like new. And we were just over halfway through that process when COVID hit and we put that on pause and we’ll pick that up again once demand suggests we need the airplanes. But within a couple years every airplane we have is either going to look new, or be new,” Hayes said.

During JetBlue’s recent third quarter earnings call, the airline reported a 15 percent year over year decline in first quarter 2020 revenue, attributed mostly to a 52 percent decline in revenue in March due to the impact of COVID-19 using lower demand for passenger travel. While the order for new Airbus A220s remains in place, JetBlue has reworked its order book with Airbus that helped lead to a $1.1 billion reduction on aircraft capital expenditures through 2022. 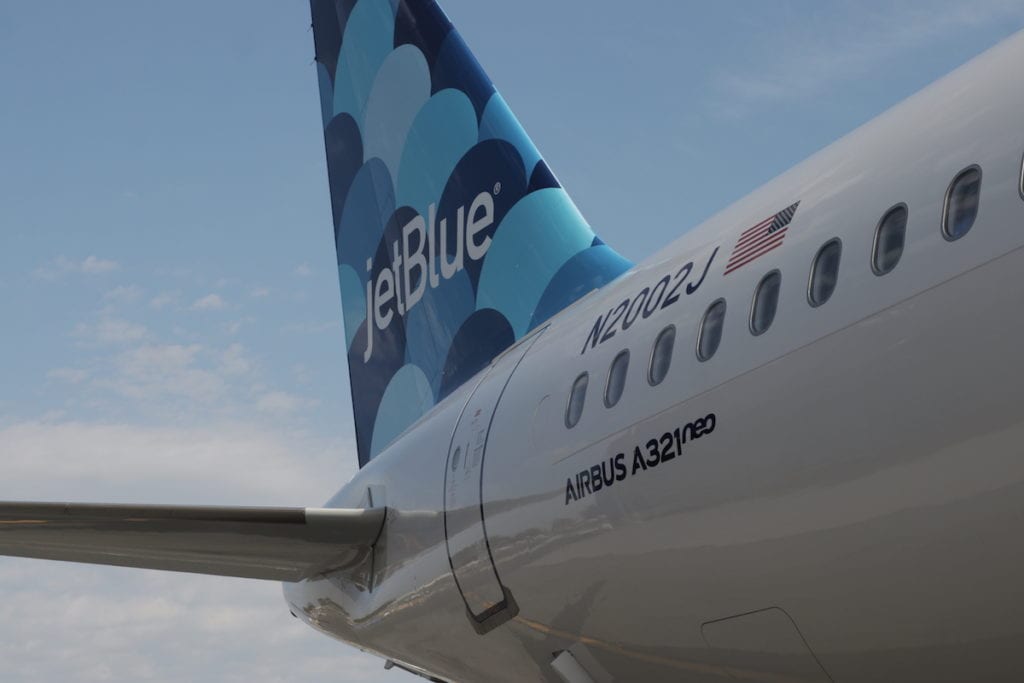 Under the Coronavirus Aid, Relief, and Economic Security Act (CARES Act), P.L. 116-136 – which became law on March 27 to provide $25 billion in economic relief for U.S.-based passenger airlines – JetBlue received an allocation of $935.8 million, $250.7 million of which it will start paying back beginning in October, with the remaining provided in direct support. On Thursday, Hayes, whose airline also has lost six employees that died from COVID-19, said that without the relief funds, JetBlue would have had to take much more drastic measure.

“If it wasn’t for the CARES Act I can’t speak for other airlines but I think that from a JetBlue perspective the sensible thing would’ve been just to ground the fleet, furlough the vast majority of our people, all of that money under federal law has to go to directly pay our crew members,” Hayes said.

COVID-19 also will not cancel JetBlue’s plans to start flying from New York to London using the first new generation Airbus A321LR it started operating in September last year. The JetBlue executive expects demand for leisure travel to rebound faster than business travel, and projects demand for flights between the U.S. and Europe to start picking back up toward the second half of 2021.

“As we looked at May we flew about 10 to 15 percent of our normal schedule, in June we’re probably going to flying around 25 percent of our normal schedule, so you’re seeing a small amount of uptick, but we’re assuming it will be an L-shaped recovery we’re planning conservatively for that,” Hayes said. “Before this happened we were flying like 15 flights a day between Boston and Washington, we’re not going to be flying 15 flights a day for a while. But maybe four or five or six, it’s just going to be a much lower volume for business travel for a while.”