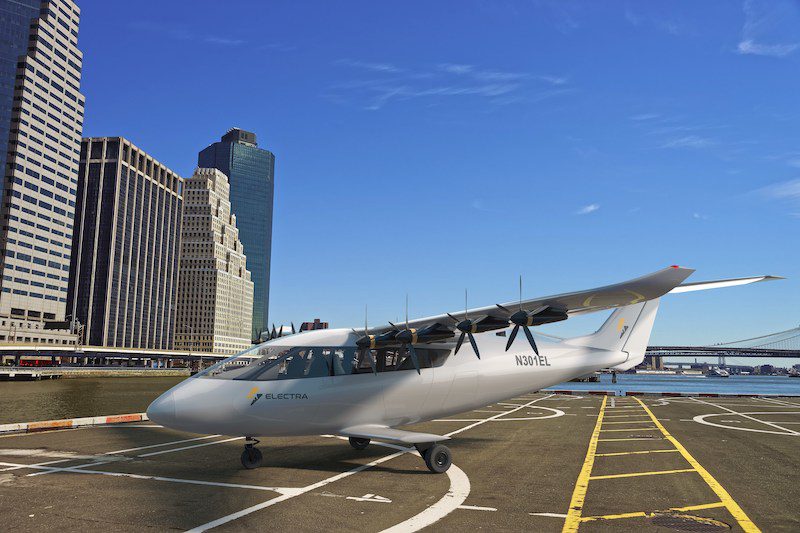 Lockheed Martin Ventures is investing in Electra’s Series A funding round to support flight testing Electra’s hybrid-electric eSTOL aircraft full-scale technology demonstrator in 2022. Pictured here is a computer-generated image of what Electra.aero’s eSTOL could look like in the future. (Electra.aero)

Electra.aero, a relatively new company pursuing new aircraft solutions for the urban and regional air mobility markets, on Tuesday said that it has received a lead investment from Lockheed Martin for a funding round that will help it get to its first flight of a technology demonstrator later this year.

The amount of the investment wasn’t disclosed and Electra is still lining up additional investors for its Series A funding round.

In addition to the investment by Lockheed Martin Ventures, the aerospace and defense giant’s venture capital unit, Lockheed Martin also signed a strategic cooperation agreement where it will work with Electra on potential solutions for the U.S. government.

Electra, which was founded in 2020 and is based in Northern Virginia, is developing a full-scale hybrid-electric ultra-short takeoff and landing (eSTOL) aircraft that can transport up to 1,800-pounds of cargo or seven to nine passengers up to 500 miles. The demonstrator aircraft will not be a full-scale model but a two-person plane to test key technologies, Robie Samanta Roy, Electra’s chief operating officer, said in an emailed statement.

Last year, Electra received a contract from the Air Force’s Agility Prime initiative, which is investing in, and leveraging, companies in the commercial electric vertical takeoff and landing for its potential future aviation needs.

“Hybrid-electric propulsion will influence every aspect of aviation,” John Langford, founder and CEO of Electra, said in a statement.

Roy said that Lockheed Martin is also essentially seeding technology “incubation,” with its investment in Electra. They are “clearly thinking about the future of air mobility” in an era of “contested logistics” that would complement the company’s existing air mobility portfolio and examine key technologies that could eventually be “brought to scale,” he said.

“Electra’s technical approach to sustainable aviation is differentiated, and we are excited to see this concept mature,” Chris Moran, vice president and general manager of Lockheed Martin Ventures, said in a statement. “We invested in Electra because of its focus on hybrid-electric technology. Hybrid-electric aircraft have the potential to deliver operational and environmental advantages over other aircraft, including increased payload and range without gambling on battery improvements. We look forward to working with the Electra team and hope to partner on opportunities in the future.”

Electra is integrating two fundamental technologies for its eSTOL aircraft, a hybrid-electric propulsion system and a blown lift wing. The company’s website shows eight motors, four on each side of the fuselage attached to the leading edge of the wing, to create distributed electric propulsion that is more cost-effective flexible for a blown lift wing than jet engines used in government-developed technology demonstrator decades ago.

Electra says its aircraft will be able to operate from small spaces, 300 by 100-feet, and operate in urban areas and remote landing strips, including from building tops.

This article was first published by Defense Daily, a sister publication to Avionics International, it has been edited, view the original version here.>>