No Clear Answers on How to Effectively Detect, Mitigate Drone Threats

May 28th, 2020   •   Comments Off on No Clear Answers on How to Effectively Detect, Mitigate Drone Threats 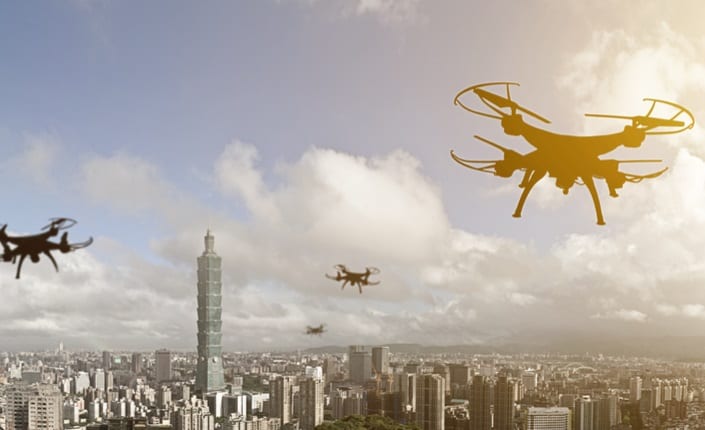 Continued proliferation and advancement of drone technology rapidly outpaces counter-drone systems, which are insufficient to defend against ‘low and slow’ airborne threats.

Successful defense against drone threats in commercial and military environments will require solving numerous challenges, according to experts speaking during a discussion hosted by the Atlantic Council — and there are no clear answers.

Counter-drone systems use a variety of different methodologies to detect nearby aircraft at low altitudes, including radar, radiofrequency (RF) sensors and electro-optical / infrared cameras (EO/IR). All of these systems have glaring weaknesses, explained Dr. Scott Crino, founder and CEO of Red Six Solutions, which has worked with the FAA, TSA and other organizations to red-team defensive systems and provide security advice.

“Nearly all counter-UAS systems are effective to some degree, but they’re effective in the operational environment that it was meant to operate in,” Crino said. “So when selected counter-UAS systems, we have to look at a suite of technologies — not just an RF sensor, not just a radar, but all of them operating and integrated together. But even when being operated that way, the drone still has the upper hand.”

RF-based detection and disruption systems, which rely on scanning sections of the electromagnetic spectrum known to be used by drones for communication with ground controllers, are defeated by frequency-hopping spread spectrum (FHSS) technology, which hops transmission frequencies faster than scanners are able to search, explained Crino.

“When an autopilot system is used, it’s what we call ‘RF-dark,’” Crino said. “There is no radio frequency broadcast between the ground controller and the aircraft itself, therefore there is nothing to sense by that RF sensor on the counter-drone system.”

Radars are ineffective at distinguishing between biologics —i.e., birds — and drones, and many radar systems are reliant on line-of-sight plus an object’s movement to consistently track it. Drone threats are often flying low and slow, according to Crino.

“Once a radar or an RF sensor has picked up on an anomaly on the horizon, we use a [EO/IR] camera to slew to where that item was sensed and determine whether it is a UAS or not. When you think of situations where there are multiple aircraft in the air, a camera can only track one at any one time,” Crino said, describing how a bad actor could use a large, easily-tracked aircraft to distract and obscure a smaller, faster-moving threat.

Drone detection technologies are a blind spot for the U.S. military in part because ‘low and slow’ trajectories have not historically been of interest to the Pentagon.

“Fast and lethal was the name of the game, but now with the proliferation of drones that are weaponizable, we have to totally reexamine the way that we are securing our facilities, VIPs and other military and critical infrastructure in order to deal with a very small object which sometimes can be much lower and slower than the trajectories we are used to identifying,” said Mary Beth Long, former assistant secretary of defense for international security affairs.

Crino sees promise in high-energy laser mitigation systems, such as one recently used aboard the USS Portland to shoot down a drone during a test.

“There’s a lot of promise in high-energy systems, lasers and high-powered microwaves that cook the aircraft almost instantaneously as it approaches,” Crino said. “It’s a little bit of a wider beam, and there is a real hesitancy to use them …  we don’t fully understand where the laser stops [and] what the impact could be on a commercial aircraft or even a satellite that’s orbiting the planet.”

Beyond technological challenges, Long cited strategic questions — changes to rules of engagement, or stricter export restrictions to allies based on integration with foreign assets? — as well as authority and airspace regulations concerns currently being grappled with by the FAA and Federal Communications Commission.

In 2018, through the Preventing Emerging Threats Act, Congress provided the Department of Homeland Security (DHS) and Department of Justice (DOJ) with the authority to use counter-UAS systems, but policies are still written to protect pilots and aircraft, creating challenges for the integration of counter-drone systems — which are treated as aircraft.

“Right now, all of our policy regulations are on the side of the pilot and not so much on the side of the user of a counter-drone system,” Crino said, listing sections of the U.S. code that guard against destruction of aircraft, unauthorized access of computer systems, interferences with government and satellite communications, and the interception of personal communications — all of which counter-UAS technologies violate as currently written.

From a societal perspective, decisions must be made concerning privacy and security, similar to the use of facial recognition and other technologies, where a thin line exists between monitoring and weaponization.

“The implications and the indirect and direct application of drones to wreak havoc are something that we have not dealt yet as a society and is going to become more difficult to deal with as drones proliferate, particularly in the commercial sector,” Long said. “We have not gotten our heads around this.”

Long ended the presentation with a clear warning, particularly aimed at policymakers in the United States.

“We tend to deal with security issues only after the worst has happened.”

The post No Clear Answers on How to Effectively Detect, Mitigate Drone Threats appeared first on Avionics.