The SOSA Technical Standards are being updated in advance of their release next year. (Elma Electronics)

The SOSA Technical Standards 1.0 are currently being reviewed and edited and are set to be released at the end of the second quarter of 2021.

“What SOSA is really trying to do is to create an open architecture for defense sensor platforms, just kind of plain and simple,” Mark Littlefield, vertical product manager at Kontron America, said. “The idea is that an open architecture will make it easier for system integration. It also will enable future technology insertions and system reconfiguration so that rather than today where you have to take out an entire box, do a whole new system, and put a whole new box onto the platform, perhaps we can do point updates where a particular technology now has a nice update, you want to take advantage so you take it out, you put it in the new one in. And the expectation is that everything should work fine along with it. It’s not quite that magic bullet, but certainly, it’s going to make that sort of thing easier.”

VPX standards, also referred to as VITA standards, define high-speed connectors in part to carry mappings for popular switched serial fabrics. These standards have been used for more than 10 years; however, they are very expansive, Littlefield said. SOSA simplifies this standard.

“What SOSA does is it really kind of whips things down to a bare minimum and says to build these kinds of systems, these are the components we want to use, both from a hardware standpoint and the software standpoint,” Littlefield said.

SOSA has added a new backplane concept to the VPX standards that adds apertures, Rodger Hosking, VP and co-founder of Pentek, said. These changes are important for optical input and output (I/O) and radio frequency (RF) signals which can impact radar and EW applications. 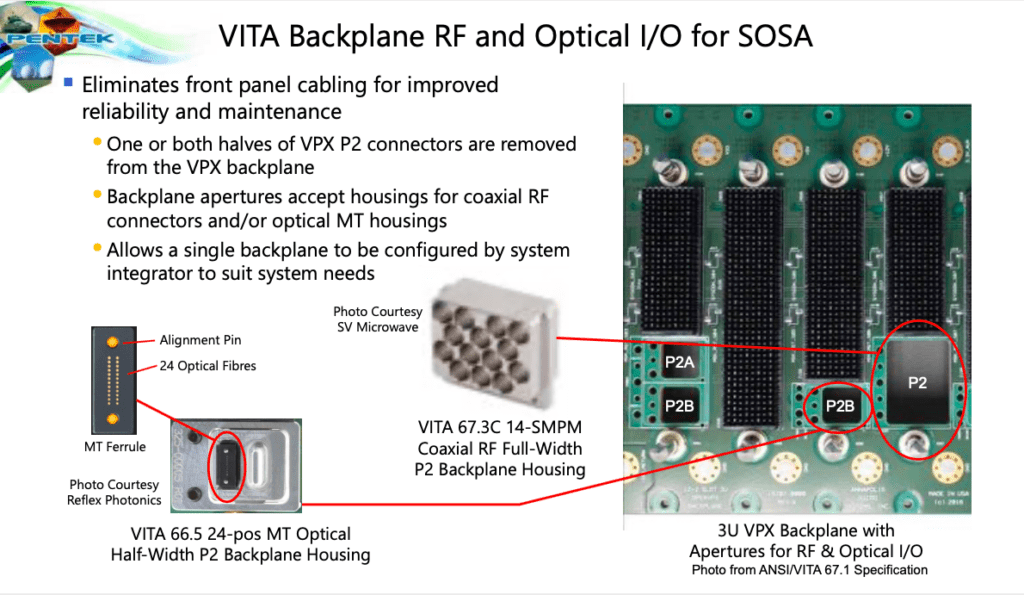 Rodger Hosking, VP and co-founder of Pentek, explained changes in backplanes between VITA and SOSA.

“One of the things for taking care of the RF and optical I/O that SOSA has aligned itself with is a new backplane concept where you have apertures or openings in the open VPX data 65 backplane,” Hosking said. “These are called apertures, and they’re intended to allow a more flexible configuration for I/O across the backplane.”

The backplane apertures are a major benefit because the designs can be reconfigured by the system integrator to handle different types of I/O by attaching appropriate housing and connectors that screw into these openings, Hosking said.

Hosking said the backplane radio clock distribution is also really important for radar and EW applications. This is where the timing card is centrally located and distributes high speed.

“This is really important for coordinating the timing between cards and also between systems,” Hosking said. “But there’s even tighter timing control required, and that is for extremely low latency synchronization and triggering for multi-gigabit sample per second data converters. That has to be done in hardware. So there are some new general-purpose LBDS pins signed to the expansion plan added to VITA to support some of these requirements within SOSA.”

While the SOSA 1.0 standards are set to be released this year, they are still evolving.

“It’s still an evolving standard, but it’s clearly driving that change in that market,” Littlefield said. “It’s addressing problems of vendor interoperability, it’s addressing problems of future upgrades, and the basic problem of vendor lock, which is a real serious problem we need to remove from the industry to ease integration. And real the real goal is to enable the market to bring faster upgrades and faster deployment to the world.”