In a show of force to U.S. industry and investors, the virtual launch of Agility Prime sought to demonstrate the Air Force’s commitment to the commercial success of electric air taxis. (U.S. Air Force)

During the Agility Prime virtual kickoff event, speakers from across NASA, the U.S. Air Force, the Department of Transportation and the Federal Aviation Administration underlined the military and economic importance of U.S. leadership in the development of electric vertical takeoff and landing aircraft, or eVTOLs.

Agility Prime is the Air Force’s effort, along with numerous other federal agencies, to support booming commercial investment into eVTOLs, championed by companies like Uber primarily for use as air taxis in urban settings. The military’s attention to this area of technological development, which has clear military applications, is driven in part by the Pentagon’s self-admitted failure to secure domestic production of small drones — a supply chain defense officials are still fighting to bring back to the U.S.

In a show of force to industry and investors, Air Force Secretary Barbara Barrett, service acquisition chief Dr. Will Roper, DOT Secretary Elaine Chao and many others sought to demonstrate the depth of the federal government and military commitment to accelerating and de-risking the development and deployment of eVTOL aircraft, both commercially and by the military.

“We want to be very clear up front that there is a path for the military market to accelerate domestic use,” said Roper. “Typically, when we engage with an industry partner, it’s our money — our funding — that is the primary basis of the relationship. But in the case of eVTOLs, we bring a lot of things that are a broader value proposition to this very exciting, transformative technology.”

With the private sector funding startups like Joby Aviation to the tune of $720 million, the Air Force will instead offer its test ranges, deep bench of engineering talent, safety certification process and even its reputation — Americans trust whatever the service chooses to fly over a stadium — to accelerate the development and certification of eVTOLs in the United States. 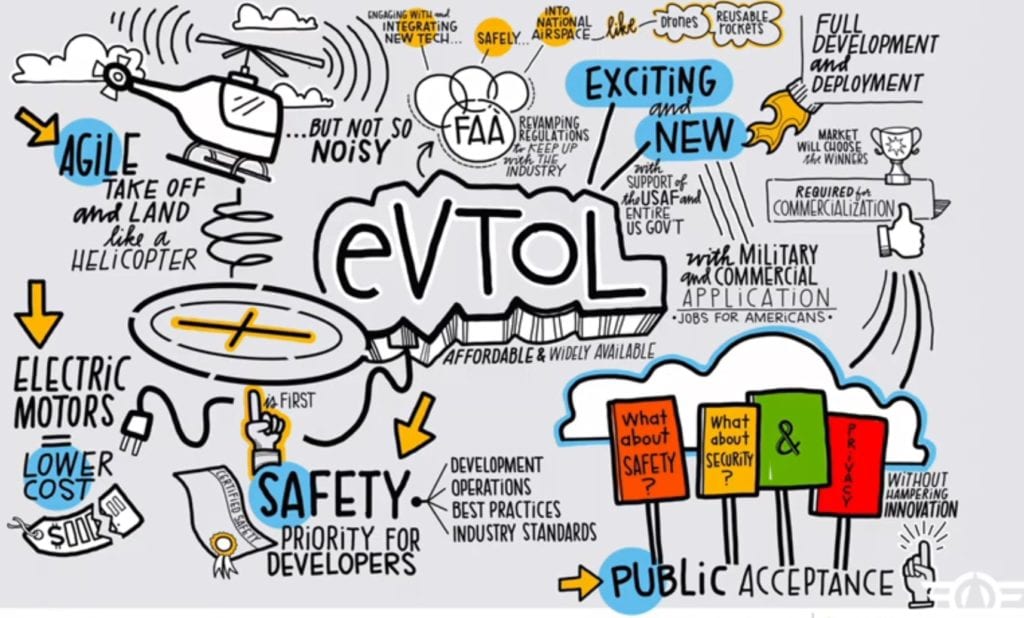 “Our value proposition in engaging with [eVTOL] systems is to bring those things — our ranges, our certifications — get these vehicles quickly through a military certification, start purchasing them, start flying them for military missions that will be radically transformed like logistics, base defense, disaster relief,” said Roper. “And every hour we log will build confidence in investors, in companies and in regulators.”

Timed with the Agility Prime virtual kickoff, the Air Force released two new challenge-based contracting opportunities — in addition to one that opened in February — seeking out nontraditional defense companies with commercial prototypes that are already in the air.

The first new challenge area, or AOI, seeks eVTOL aircraft capable of carrying 1-2 people more than 10 miles at a speed of at least 45 mph. At least a few UAM aircraft currently under development in the private sector are relevant to these requirements, including Wisk’s autonomous two-seater, Cora — on track for passenger transport trials in New Zealand — and Opener’s ultralight BlackFly.

The second AOI released this week by Agility Prime targets unmanned cargo eVTOLs with a maximum gross takeoff weight greater than 1,320 pounds and a payload exceeding 500 pounds. Qualifying aircraft must have a range over 200 miles, cruise speed greater than 100 mph, and an endurance over 100 minutes.

To qualify for either AOI — or the opportunity released in February for larger, 3-8 passenger eVTOLs — the aircraft must make its first full-scale flight prior to Dec. 17, 2020.

“We see a lot of use cases that have to do with the transport of small packages [in the field], or small groups of people,” Hinote said.

While helicopters will certainly continue to be used in the U.S. military, the Air Force is looking for “another, more widespread, widely applicable solution,” Hinote said, adding that traditional helicopters are generally loud, expensive to build, and require specialized training to fly.

“We certainly would like a solution at a lower cost point for all the right reasons,” he added.

The appeal of eVTOLs to the Air Force lies in five attributes where the aircraft promise to outshine helicopters: mechanical simplicity, for lower maintenance cost and time; autonomy, for improved safety and demands on personnel; ease of mass production; distributed propulsion, for improved acoustics; and runway independence.

“Can you imagine what these teams could do with the ability to self-deploy and [that are] no longer relying on the logistics transportation network?” Gen. Miller said. “Can you imagine a host of vehicles that any airman can operate to do airfield assessments, security patrols and surveillance, tactical airborne [command and control] and just so much more?”

Through Agility Prime’s “air race to certification” challenges, the service hopes to transition one or multiple eVTOL aircraft to production through more traditional contracting, aiming to initiate a program of record or make a fielding decision by 2023, according to Natasha Tolentino, Agility Prime program manager. 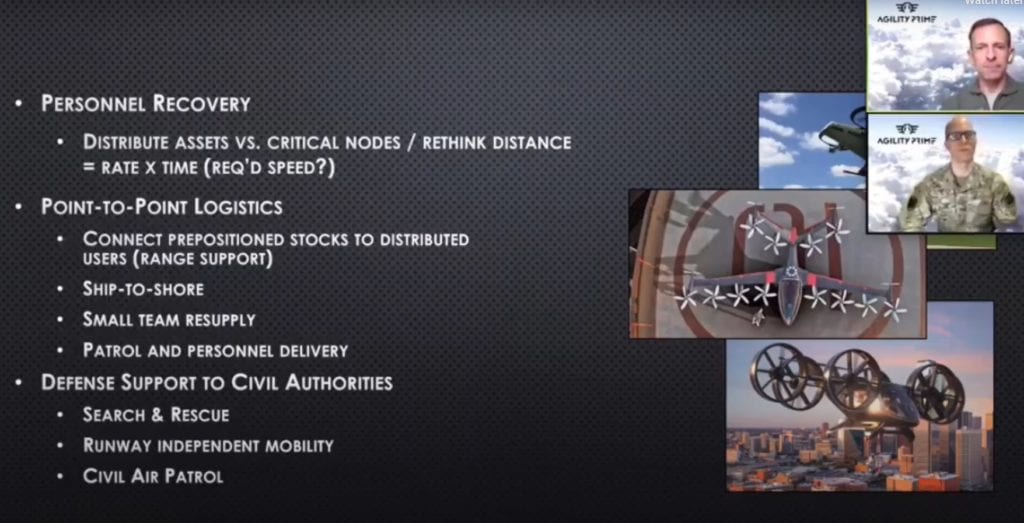 Some of the example use cases offered by Air Force presenters during the Agility Prime virtual kickoff. (U.S. Air Force)

Despite the example use cases given, however, the Air Force is still determining exactly what it plans to do with these aircraft, once procured.

“I truly believe there is a requirement for this, we just don’t quite know what it is yet,” said Lynda Rutledge, Air Force Air Mobility program executive officer.

“We actually have in Nebraska … a military certification office (MCO) whose sole responsibility is to give us that kind of transition between FAA and DoD airworthiness,” said Delsing. “So when we go to buy civilian-derivative aircraft and we turn them into military aircraft, that MCO helps us with that transition between an FAA-type certificate and a military type certificate … And that’s one of the other reasons that we are so committed to helping the [vendors] in this industry get to their FAA certification, because that only makes it easier for us in the long run.”

And that assistance may prove critical, as FAA certification officials are increasingly working with eVTOLs — or “advanced air mobility” aircraft, a term NASA and the FAA now use to refer to an umbrella of new propulsion technologies, unmanned aviation and expanded use of low-altitude airspace.

“I’ve always felt that government, the Department of Defense, and NASA have a vital role to reduce risk,” said Mark Moore, aviation director of engineering at Uber Elevate. “This is bigger than any one company. This is tens of billions of dollars of investment that is required.”

“If you look across our partners, just to develop one experimental aircraft is $100 million-$150 million. To certify that aircraft is $700 million to $1 billion,” Moore added. “These are really, really high stakes, and for both the Department of Defense and NASA to be helping to reduce risk, and to show the breadth of missions that these things can apply to, is fantastic. It really helps the investment community to understand and to stick with this, even during trying days such as we’re going through right now.”