To Lower Emissions, the Military Focuses on Increasing Aircraft Efficiency

August 12th, 2021   •   Comments Off on To Lower Emissions, the Military Focuses on Increasing Aircraft Efficiency 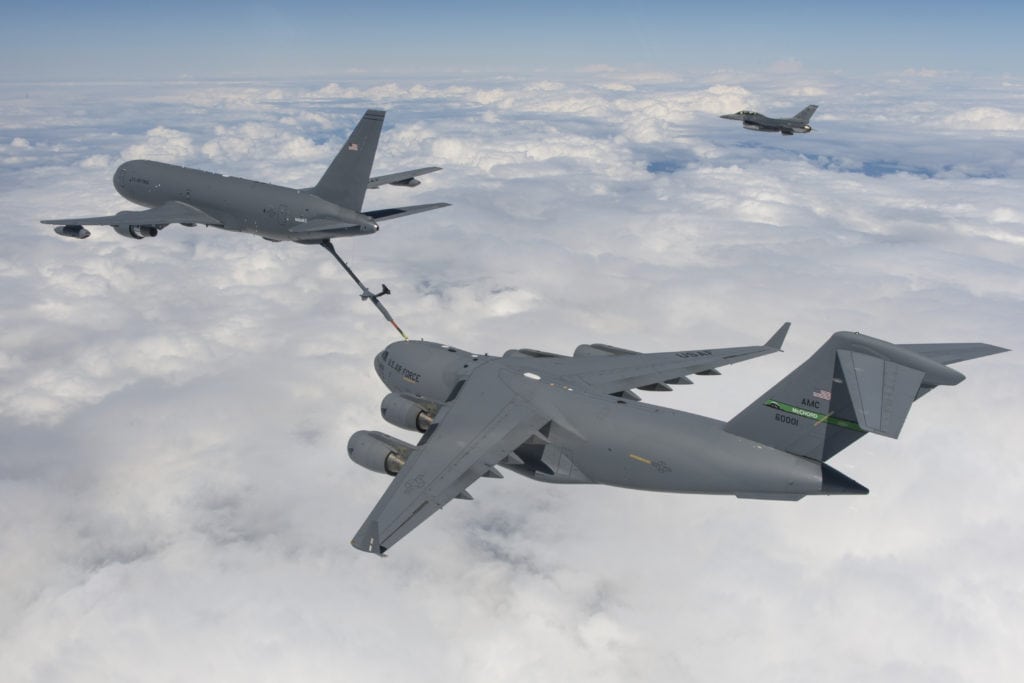 A KC-46 offloading fuel to a C-17 during a flight test. (Photo courtesy of Boeing)

As the commercial aviation industry increasingly shifts towards new technology to reach sustainability targets, the military is more focused on improving aircraft efficiency to increase sustainability rather than concentrating on reducing greenhouse gas emissions.

“The mission of the Air Force is to fly, fight and win in the air, in space, and in cyberspace,” Troy Warshel, principal director and chief of staff at the Air Force Operational Energy (SAF/IEN), said during a panel at AIAA’s Propulsion Energy Forum on Aug. 9. “Nowhere in that mission description do you hear anything about energy efficiency or greenhouse gas production because, quite truthfully, our mission is to kill bad guys and break their toys and that’s what our focus has to be.”

“If one were to say that the Air Force is not interested in fuel efficiency, you probably have your head in the sand,” Warshel said. “I think for us, the other side of the fuel efficiency coin is combat capability, you know, if we can go longer, farther, faster, and accomplish the mission done through efficiency, that increasing combat capability is really what we’re looking for. The shiny edge of that coin is that there’s a greenhouse gas reduction capability.”

Increasing the efficiency of these aircraft would not have a small impact. Warshel said if the Air Force increased the fuel efficiency of the C-17 fleet by just one percent, it would reduce greenhouse gas emissions by more than if the DoD’s entire fleet of non-tactical vehicles were made electric.

When increasing energy efficiency, the Air Force is not looking to decrease combat capability by decreasing training.

“We’re looking at energy efficiency, you know, in the realm of increasing combat capability, part of that is, is a training and education piece,” Warshel said. “We’ve seen some bad behavior in other countries where they were given greenhouse gas emission caps…and they basically parked airplanes or stop training or stop flying. And for us as an Air Force, we don’t think that’s an option, we still have to train, we still have to practice like we’re gonna fight.”

Warshel said the Air Force is looking into software solutions to help deploy assets in a way that optimizes energy use. For example, where they previously planned a tanker schedule on a whiteboard, they are now enlisting help from Google.

“Working with those guys, we were able to come up with the program, Jigsaw, that has a significant increase in tanker utilization,” Warshel said. “It decreased the number of tankers required in theater, it decreased planning time from 12 hours to about four hours to come up with a tanker plan, and it saved over $200 million just in reducing airborne assets.”

There are also small changes that can be made to aircraft today to increase their efficiency. Warshel said a small piece of plastic on a C-17 could end up saving $10 million a year in reduced fuel consumption.

“If we put a one percent drag reduction on a C-17 by basically gluing a little piece of plastic on the aft end of the aircraft, which we could do for about $3 million for the entire C-17 fleet, we would eventually end up saving $10 million a year in reduced fuel consumption,” Warshel said. “Just by that simple thing alone.”

Most of the fuel the Air Forces uses goes toward transport aircraft.

It is important to analyze which aircraft are using the most fuel because the transport aircraft and tanker fleet use commercial engines and the commercial aviation industry is already committing to making its engines more sustainable to reach zero emissions goals.

“What’s not often realized is that those fleets, the commercial side of the transport tanker fleet, they operate on commercial off-the-shelf engines, they’re not uniquely developed for the military,” Keith Numbers, technical advisor for propulsion of the engineering directorate at the Air Force Life Cycle Management Center, said during the panel. “So with that, I believe we in the Air Force are going to be followers of industry in terms of their commercial developments to reduce fuel burn emissions.”

“The force does not operate our fleet to nearly the same extent in terms of flying hours as the commercial industry,” Numbers said. “As such, we tend to operate our engines for a much longer period of time in terms of years and service than the commercial industry typically does. So historically, what that means is our opportunity to refresh technology or those engines is much less often than commercial. So we’re going to be challenged to keep up with industry.”

“We are subject to what commercial industry does with the sustainable fuels in the blending within the Jet A specification,” Numbers said. “That does pose new risks for us.”

These risks include the special materials within various military aircraft that differ from commercial aircraft. There is also concern about how these fuels will react in very high altitude operations or under cold temperatures. Numbers said the augmenters and afterburners are also a risk with the use of SAF.

In response to these concerns, the Air Force is drafting an airworthiness advisory for the 50 percent blend.

“The Air Force is currently drafting an airworthiness advisory to address, specifically, the alcohol-to-jet form of alternative fuels with blends up to 50 percent,” Numbers aid. “We’ve already done that assessment for blends up to 30 percent, but we’re not sure what the risks are going to be as we preset blending up to 50 percent. That advisory is in a draft right now and should be forthcoming.”

The Air Force is not the only branch looking to increase energy efficiency. The Navy and Marine Corps are also interested in increasing their efficiencies, Richard Kamin, senior scientific technical manager of energy and fuels at the Naval Air Warfare Center Aircraft Division, said during the panel.

“Efficiency is the most important thing in our lives because our runway is so small and there’s no divert,” Kamin said. “So really, when you talk to sustainability in Navy and Marine Corps, we’ve been looking at that for a long time. We’ve been working on that issue, we just call our terms of success, a lot different.”

While the Navy and Marine Corps do not consume as much fuel as the Air Force, their fuel is mostly used by tactical fighters. Kamin said that about 60 percent of their fuel is burned by F-18s and F-35s.

“We do not have a big heavy transport consumption,” Kamin said. “So our challenge is a little greater, how do we stretch efficiency into those small packages.”

The Navy and Marine Corps have been working with OEMs to develop new components for tactical aircraft engines to make them more efficient, Kamin said. They also have supported multiple science and technologies programs that are working on this issue.

“We have demonstrated in a lot of our tactical systems, the capability for technologies that can increase our efficiency from 5 to 8 percent,” Kamin said. “Five to 8 percent of a fighter is huge.”

They are also working to incorporate more simulator usage.

“We’ve expanded our virtual training and simulator usage, the most efficient fuel saved is the gallon we never burn,” Kamin said. “That’s 100 percent greenhouse gas emissions savings…Yes, fighters, trainers, everyone has to fly, but what can we move to the simulated world?”

While the military has its own motivations when it comes to sustainability, the industry that supports it is having to contend with new regulations. Winter said that U.S. allies are requiring emissions information on aircraft platforms that they receive from foreign military sales.

“As far as the importance of sustainability to military, I would submit to you that it’s important right now,” Winter said. “In terms of some of the foreign military campaigns that we are engaged in with our allies and our partners on some of these aircraft platforms, we are being asked for lifecycle analysis specifically focused on scope three, which is the emissions in the use phase, and these are being used as selection criteria for foreign military sales.”

Winter cites Switzerland’s purchase of the F-35 where their citizens voted on the procurement in a referendum. During this vote, there were many articles in the press that focused on the sustainability of the aircraft.

The UK Ministry of Defence also recently published a rule that suppliers must have net 2050 zero-emissions goals in place to be able to compete in procurements. The company must also provide metrics and milestones to achieve these goals. The U.S. has also joined in this trend when President Biden released an executive order in May that would require companies to publicly disclose greenhouse gas emissions, the financial risk from climate, and science-based reduction targets with metrics and progress determination.

“This is not a problem that’s going to go away…and so this is a real opportunity for us to partner on with government, public-private partnerships, to make the necessary investments in technology so that we can make progress and we can move forward towards a sustainable future for aviation,” Winter said.