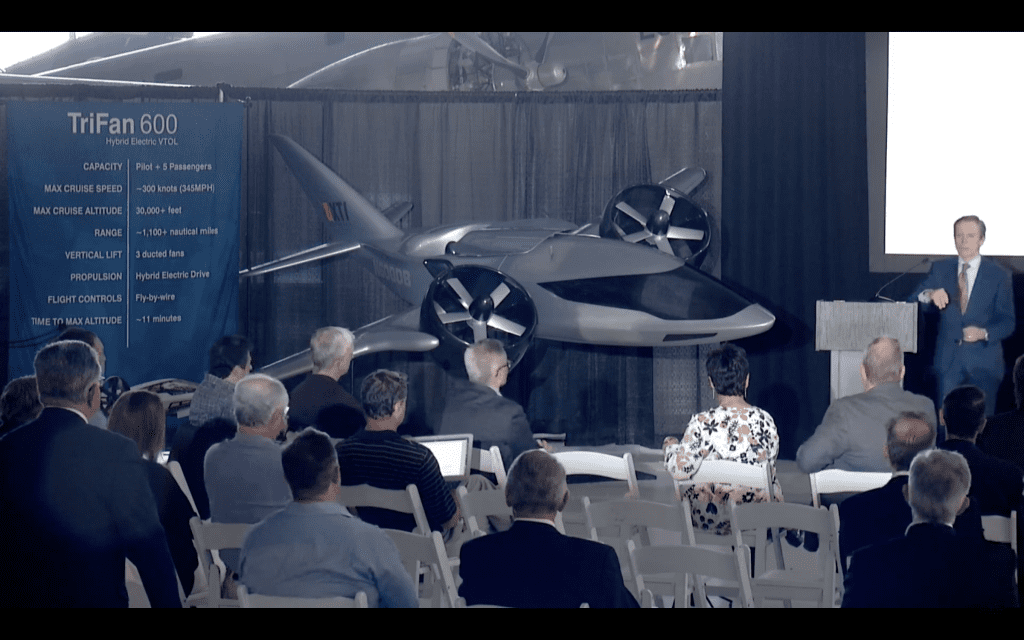 Xeriant has signed an agreement to develop a hybrid-electric fixed-wing long-range vertical takeoff and landing (VTOL) aircraft, the TriFan 600, under a new joint venture with XTI Aircraft, according to a June 14 announcement from the company.

“As we look at these majestic aircraft, we see how the industry has evolved as new technologies have enabled new capabilities and missions, dynamic with it continues today,” Keith Duffy, the CEO of Xeriant, the Florida-based aerospace investment firm, said during the June 14 press conference. “We are at an inflection point in the industry, a transitional period of innovation unlike any other in history, which promises greater accessibility to aerial mobility with a reduced environmental footprint, through the development of revolutionary new VTOL aircraft with electric or hybrid-electric propulsion.”

The TriFan 600 will have VTOL range of 750 miles with speeds up to 345 mph, CEO of XTI, Bob LaBelle, said during the press conference. The aircraft will fly at altitudes up to 29,000 feet and will be able to seat nine passengers when used as an air taxi. 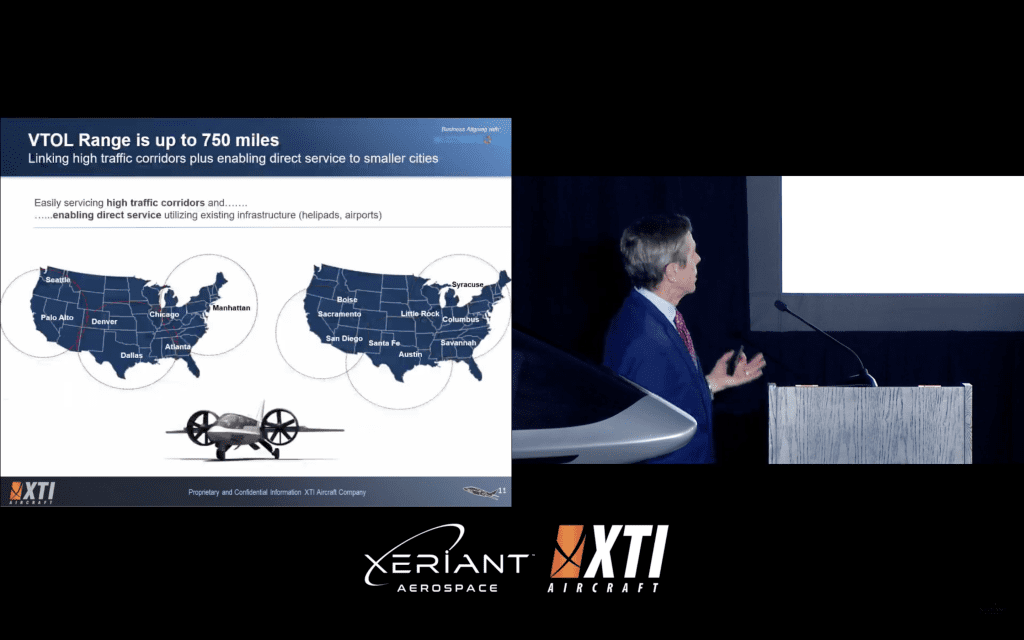 Xeriant has signed an agreement to develop a hybrid-electric fixed-wing long-range vertical takeoff and landing (VTOL) aircraft, the TriFan 600, with XTI Aircraft company.

XTI is developing the TriFan 600’s propulsion system with GE Aviation, LaBelle said. The propulsion system will consist of a GE catalyst engine which will power generators that power the electric motors. The aircraft will also include three batteries to provide supplemental lift in vertical mode and that can be recharged during flight.

“We’re using batteries in series with the engine to provide a what we call a series hybrid system,” LaBelle said. “The batteries provide extra boost on vertical takeoff and then when you’re cruising, the batteries are off and the airplane flies on a much more efficient engine that burns less fuel, and that powers a generator which then powers these electric motors in each of the two fans because the rear fan is turned off.” 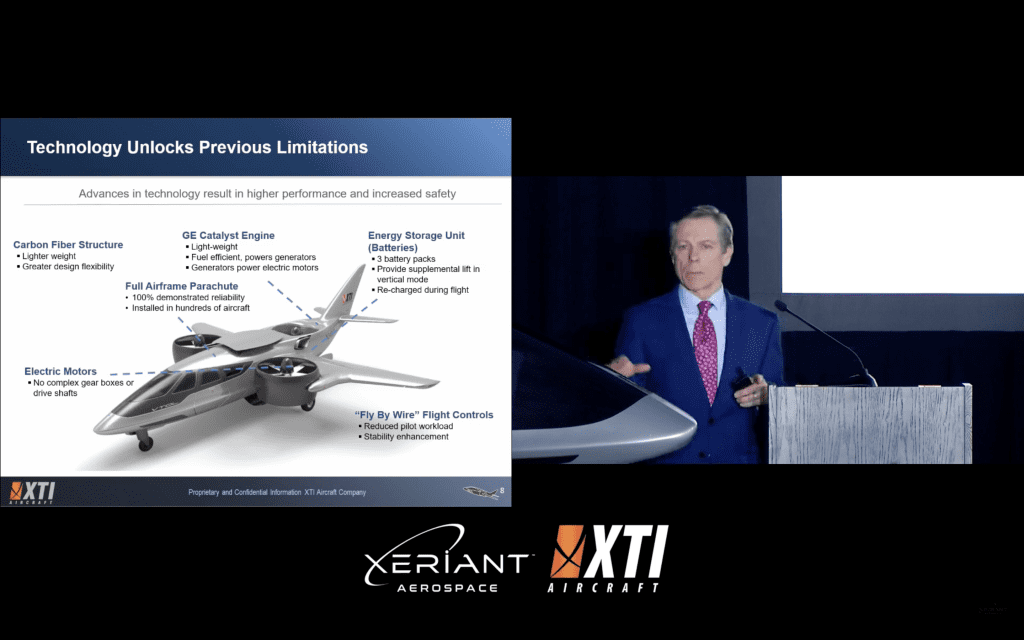 The TriFan 600 will be used for point-to-point passenger transport and could be used for business commuter aviation, emergency medical transport, urban air mobility, or military missions.

The aircraft will use fly-by-wire flight controls to reduce pilot workload and it will have a carbon fiber structure to decrease its weight. It will also include a full airframe parachute.

The TriFan 600 will be used for point-to-point passenger transport and could be used for business commuter aviation, emergency medical transport, urban air mobility, or military missions, LaBelle said.

According to LaBelle, the TriFan 600 will reduce direct operation costs by 50 percent, deliver a 40 percent reduction in CO2 emissions, and reduced noise by 50 percent.

“We’re going to reduce emissions, provide point-to-point travel, and there’s a huge opportunity where there isn’t as much infrastructure as we see here in the United States,” LaBelle said. “So, you know, you don’t have to build new runways, you can still go far and fast. So, this is what we’re delivering to the market.”

LaBelle said the TriFan 600 will be certified under available Federal Aviation Administration (FAA) regulations instead of having to create new regulations as with other air taxi models.

“One of the big things I’d like to emphasize is that we don’t need a whole new set of regulations to fly this,” LaBelle said. “We’re going to certify under currently available FAA regulations, and we also, again, don’t need charging recharging. We don’t need new runways; we can operate perfectly within the current National Airspace System of this country or any other country.”

XTI predicts that the TriFan 600 will take its first test flights in 2022 with certification expected by 2024.

While the current design of the TriFan 600 will not be a zero-emissions aircraft XTI has a plan to make it one in the future, LaBelle said. This could involve solutions like replacing the engine with applicable batteries or using a hydrogen fuel cell system.

“We do have a very clear pathway, we think, to zero emissions,” LaBelle said. “Taking the engine out of the aircraft, it’s a long way down the road, but batteries are a possibility…There’s unknown breakthroughs that will occur over time which will benefit that but if the energy density that’s in batteries versus a gallon of fuel is comparable. The other one that’s promising is hydrogen fuel cells and or other types of hydrogen fuel systems, and my personal belief is that those have a much more logical progression to potentially being installed in an aircraft like this or even larger ones.”

The post Xeriant Has Joined XTI to Develop the TriFan 600 appeared first on Aviation Today.