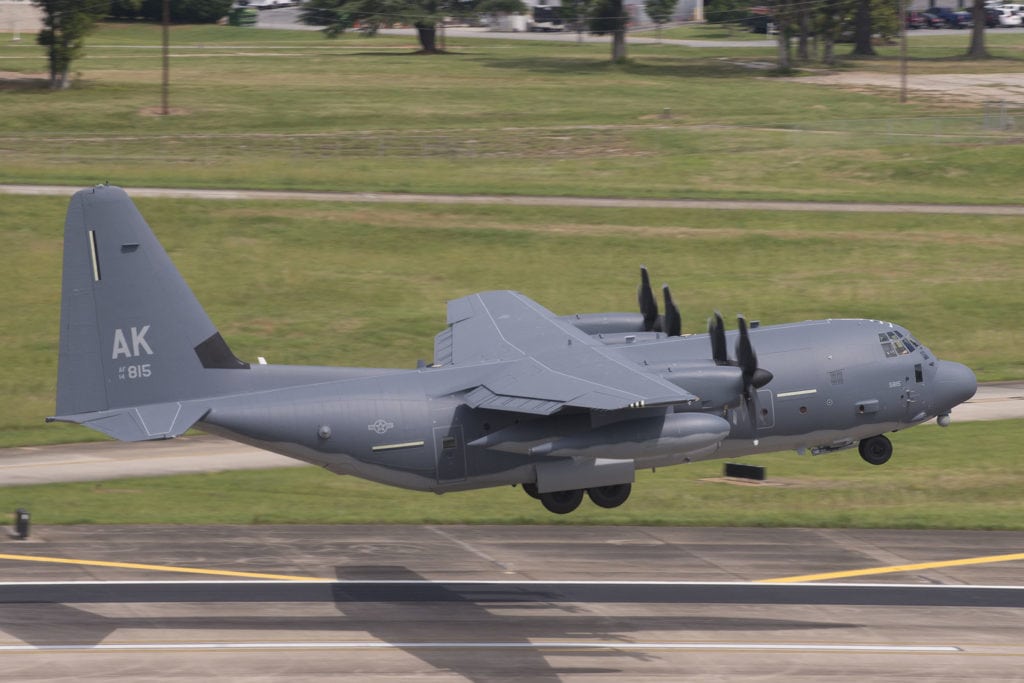 U.S. military aircraft, such as the U.S. Air National Guard’s HC-130J Combat King II pictured here, use radar altimeters that could be impacted by 5G signals from planned network deployments that have been delayed to address Federal Aviation Administration concerns.  (PRNewsfoto/Lockheed Martin Aeronautics…)

U.S. aerospace firms are suggesting that an upcoming 5G rollout by AT&T and Verizon could lead to harmful interference with military radar altimeters. Earlier this month, the wireless companies said that they plan to move the debut back a month from Dec. 5 to Jan. 5, 2022 to address Federal Aviation Administration (FAA) concerns about potential 5G interference with commercial cockpit safety systems.

Since October 2017, aviation companies, starting with Boeing, have warned federal officials of the danger 5G transmissions in the 3.7 – 3.98 GHz frequency range–the “C band”–may pose in interfering with and giving false readings to commercial and military radar altimeters operating nearby in the 4.2-4.4 GHz band, per a Nov. 18 letter by aviation companies and interest groups to the Federal Communications Commission (FCC). Radar altimeters help pilots flying at 2,500 feet and below to determine altitude precisely.

The missive criticized what the organizations said was a downplaying of the 5G interference threat by CTIA, the wireless industry’s trade association.

For example, the letter said that CTIA should not point to the U.S. Navy’s AN/SPN-43 radar by ITT-Gilfillan, now part of L3Harris Technologies, as an example. Navy aircraft carriers use the SPN-43 for air traffic control.

“CTIA has once again brought up this system that does not disrupt normal aviation operations due to the combination of power, duty cycle, waveform and the fact this system is deployed well away from aircraft landing and takeoff areas,” the letter said.

“The commission should not consider CTIA’s anecdotal examples as reasons to ignore the aviation industry’s desire to protect public safety without debilitating impacts on travel and other critical aviation operations,” per the Nov. 18 letter to the FCC. “Aviation’s findings of potential interference impacts require a very conservative analysis, focusing on worst case scenarios, because it could only take one instance of harmful interference to cause an accident. The fact no aircraft have crashed to date due to 5G interference in another country is not a reason to ignore the potential of it happening when 5G is deployed in the 3700-3980 MHz band in the U.S. Power levels and deployment scenarios are different than in the U.S, and even with these differences 5G deployment restrictions are in place in some countries, such as Canada and France and being considered in others.”

In October last year, the Radio Technical Commission for Aeronautics (RTCA) released a study on the possible impacts of 5G interference with commercial aviation, and the organization said that it would perform additional work to determine any interference with military radar altimeters, if asked.

The modern standard for commercial and civil aircraft is the frequency-modulated continuous wave (FMCW) radar altimeter, while many military aircraft still have unmodulated pulse radar altimeters, per the study.

The Nov. 18 letter by the aerospace firms said that 5G interference would impose significant costs on the aviation industry.

“Each radio [sic] altimeter and the entire system could undergo an examination as a result of just one reported radio [sic] altimeter error,” the letter said. “As part of that examination, one or more of the radio [sic] altimeters might need to be removed and tested. Additionally, the wiring involved in sending altimeter information through the aircraft might need to be checked. Each of these tasks are time consuming and not carried out lightly. The process to determine whether the fault is with the aircraft could take many months. Only then, if it is determined that everything was working properly, would an operator know to start looking at external interference sources.”

The Pentagon and defense companies are looking to 5G to accelerate military communications and expand available bandwidth. This month, Lockheed Martin said that it teamed with Verizon on “5G.MIL” through the use of a Verizon 5G commercial network at Lockheed Martin’s 5G  test range in Colorado to help run military applications at Lockheed Martin Skunk Works Integration Facility and Test Center in Texas.

This article was first published by Defense Daily, a sister publication to Avionics International, it has been edited, to view the original version, click here.