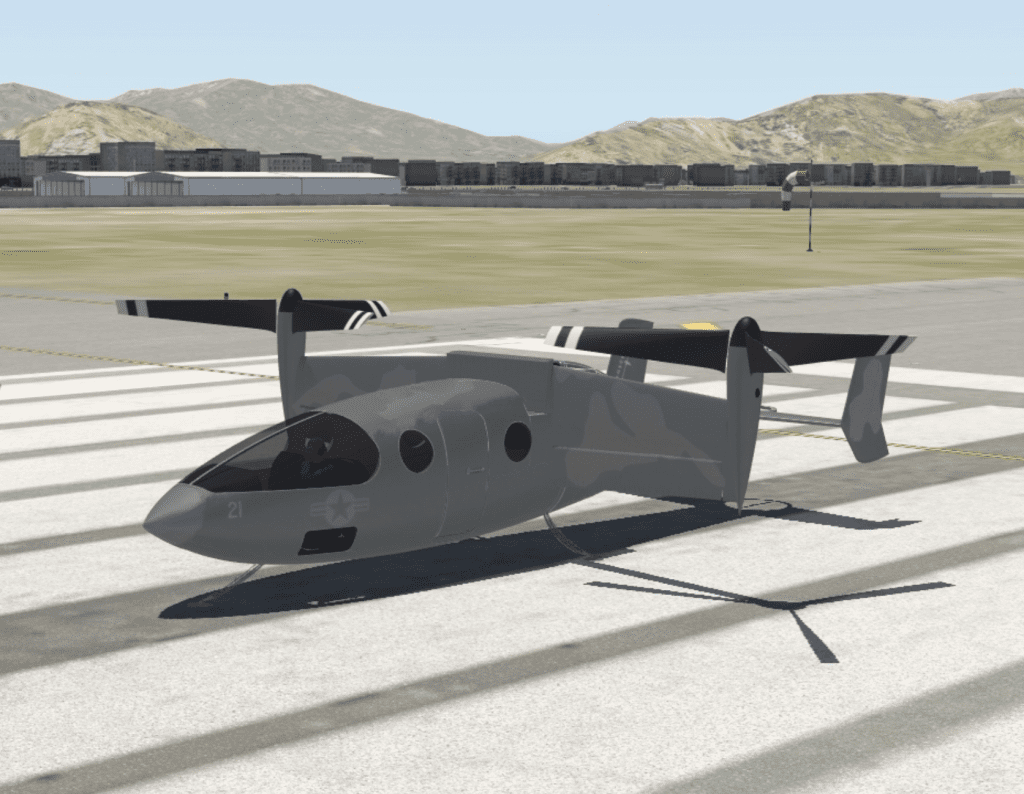 The aircraft will have a tilt-wing fly-by-wire design and be able to reach speeds of 405 mph with a range of 550 miles, according to the company’s website. The idea behind its design is to have the speed and comfort of a jet with the flexibility of a helicopter. (Transcend Air)

AFWERX is working with Transcend Air through a new contract that will explore “nap of the Earth” flight, whose flights require the aircraft to fly low and follow the contours of terrain as a way of remaining undetected, with high-speed vertical take-off and landing (VTOL) aircraft.

These aircraft would provide military support for small unit resupply and causality evacuation missions, according to an April 5 AFWERX press release.

The contract includes a partnership with Auburn University to explore simplified vehicle operation and flight control laws for these flights using Transcend Air’s Vy 400 VTOL. The Vy 400 VTOL will have to be customized for military support which is also part of the contract.

Peter Schmidt, chief operations officer and co-founder at Transcend Air, told Avionics International  the goal of the research and development contract is to develop the flight control laws that will be used as waypoints for these missions.

The customizations of the aircraft will then be made based on the flight control laws. Transcend Air will include a rescue winch and compatible doorway, higher energy absorption landing gear, and an ambulance interior within the aircraft design to meet mission needs.

“The R&D goal is to realize control laws that will transit a pre-defined set of waypoints as fast as possible and as close to terrain as possible without exceeding operator-configured max g (force of gravity) loads,” Schmidt said. “Thus, on the dash out to a rescue situation, the Air Force para-rescue jumper (PJ) operator of the aircraft might select a high max g load because they are fully fit and can take the strain, while on the return with injured personnel, they would typically select a lower g load to protect a wounded patient.”

The Vy 400 is currently still in the design phase and should be ready to enter into service by mid 2024, Schmidt said. The aircraft will have a tilt-wing fly-by-wire design and be able to reach speeds of 405 mph with a range of 550 miles, according to the company’s website. The idea behind its design is to have the speed and comfort of a jet with the flexibility of a helicopter.

Schmidt said the advantage of using the Vy 400 for these missions is its high-speed capabilities.

“The Vy’s advantage is speed,” Schmidt said. “There is a “Golden Hour” to get injured crew members medical treatment before survival rates fall steeply. The Vy can be out and back in an hour to over six times as much area as a conventional helicopter.”

Transcend Air’s partnership with Auburn University will work to balance the Vy 400’s speed with g-forces, Schmidt said. The ability to increase and decrease g-forces quickly will be important for nap of the earth flights because that determines how fast you can fly in mountainous terrain.

Vy 400 will not require a trained pilot and instead will use an operator with less training, according to Schmidt. The simplified vehicle operations work done through this contract will help inform the training program for operators.

“It is designed to fly mission profiles uploaded to it pre-departure, and if need be, the operator can use the stick and power lever inceptors to modify the flight path, for example, to maneuver away from hostiles,” Schmidt said. “By default, the aircraft will return safely to its original route once the operator stops manipulating the controls. They will have simple touch screen buttons to return to base, or to head to one of a set of pre-charted safe landing zones or bases.”

The post AFWERX Invests in Nap of the Earth Flight with Vy 400 VTOL appeared first on Aviation Today.