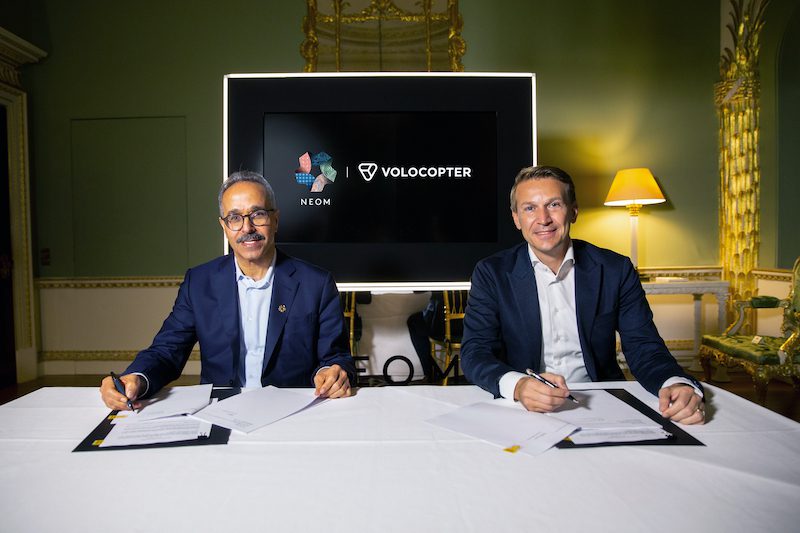 Volocopter is teaming up with NEOM to provide air taxi services for a zero-emissions customized public vertical mobility system in a “smart city” in Saudi Arabia.

Volocopter announced a new joint venture company this week with NEOM, an enterprise that is developing a “smart city” on the coast of Saudi Arabia’s Red Sea. The joint venture company was formed to design and operate what could be the world’s first customized public vertical mobility system. NEOM’s public transit system will incorporate air taxi services and may commence zero-emission operations in 2025. Use of electric vertical takeoff and landing (eVTOL) aircraft will also minimize disruption to the area’s natural environment during development.

One advantage is that this joint venture is starting with a blank canvas and will be able to integrate an eVTOL network starting with the initial city planning phase. Additionally, Volocopter and NEOM will be involved in designing and creating infrastructure and flight regulations from the ground up. NEOM’s Head of Technology and Digital, Joseph Bradley, says that the organization “is not about building a smart city, it is about building the first cognitive city, where world-class technology is fueled with data and intelligence to interact seamlessly with its population.”

NEOM has confirmed an order of 15 VTOL aircraft from Volocopter, including 10 of the VoloCity model (for passengers) and 5 VoloDrones (for cargo). Technical and operational planning will start up in 2022 when the joint venture will be scaled up.

The collaboration with NEOM isn’t Volocopter’s first joint venture. Aerofugia, a subsidiary of China’s Geely Technology Group, joined Volocopter in September 2021 to bring 150 urban air mobility aircraft into China within the next three to five years. Florian Reuter, CEO of Volocopter, commented on that joint venture deal, saying that it marked “another important milestone on our journey to bring affordable electric air mobility to China, the biggest single market opportunity for the UAM industry. […] We are in pole position to introduce air taxi services globally in a safe, sustainable, and practical manner.”

Volocopter also announced in October a new partnership with Italy’s largest airport operator, Aeroporti di Roma. Rome is one of the first European cities to commit to setting up electric air taxi operations; Paris made a similar guarantee to bring electric air taxis to the 2024 Olympic Games.

This new joint venture with NEOM is likely to benefit the Saudi Arabian company as they move to implement the first sustainable and connected mobility system which will be powered by 100% renewable energy. NEOM’s CEO, Nadhmi Al-Nasr, stated the importance of mobility in modern urban infrastructure design. “Through this joint venture with Volocopter,” he said in a press release, “we are demonstrating to the world that NEOM is the ideal region to implement urban air mobility rapidly and create a fully integrated vertical mobility ecosystem.”