Sustainable Aviation Fuels Aren’t Sustainable, Not Yet at Least

August 6th, 2021   •   Comments Off on Sustainable Aviation Fuels Aren’t Sustainable, Not Yet at Least 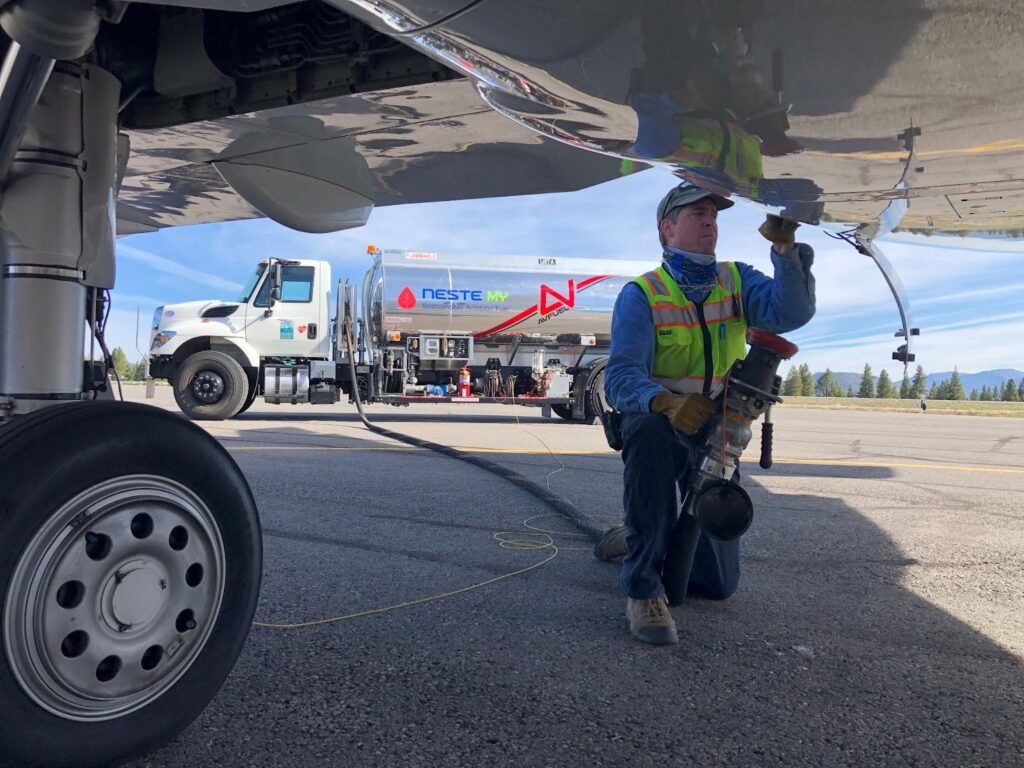 Sustainable aviation fuels (SAF) are attractive to the aviation industry because they provide a large reduction of greenhouse gas emissions with little changes to current technology. SAF is a drop-in solution meaning current aircraft can use a 50 percent blend of SAF and Jet A with no modifications. It can also provide up to an 80 percent reduction in emissions compared to jet fuel. Because of these benefits, many companies have cited SAF as a major part of their strategy to get to net-zero emissions.

Alaska Air Group GEO Ben Minicucci spoke in a June 30 Washington Post Live event about the company’s strategy to get to net zero emissions by 2040 and cited SAF as the most impactful solution in their plan.

“…A big one, is sustainable aviation fuels,” Minicucci said. “This is probably the biggest enabler to get to 2040. There is a lot of work being done with the government on a SAF blender’s tax benefit and there’s a lot being done with industry to increase the amount of sustainable aviation fuel. So this will be a huge one, something that we all have to work out because it will have the largest impact.”

While the aviation industry has found an environmentally sustainable technology in SAF, the technology to produce it is not yet economically sustainable. SAF currently costs four times as much as conventional jet fuel and it makes up less than one percent of fuel available in the market.

“Right now, the cost of sustainable aviation fuel on its own without any incentives, if you will, would cost maybe four or five times that of existing petroleum fuels and that’s not sustainable for the industry,” Sheila Dillard, the director of the bioenergy technologies office at the Department of Energy’s Office of energy efficiency and renewable energy, told Aviation Today.

Experts in the aviation industry say that there is no one solution to increasing the supply of SAF, but a combination of policy incentives, capital investments, and time is necessary for these fuels to be an effective sustainable solution for the industry.

Paul Stein, chief technology officer at Rolls-Royce PLC, compared the need for the development of SAF to the current COVID-19 vaccination production during a panel discussion at the remotely hosted Farnborough International Airshow Connect on July 14.

“Just have a look at the current vaccination crisis around the world and just how much the world has re-industrialized to produce billions of doses of vaccine,” Stein said. “It’s that sort of spirit that’s going to be required to get the scale into sustainable aviation fuels, and I think it’s entirely possible.”

Some in the industry are looking towards governments and policy programs to increase SAF. Naveed Hussain, chief technology officer and vice president and general manager at Boeing Research & Technology, said that to accelerate the scale of SAF available, there need to be incentive programs.

“That’s going to involve a number of different elements, certainly things like incentive programs to make SAF economically competitive with Jet A for airlines and economically attractive relative to transport fuels for fuel producers, access to capital to enable the development of these new production capacities by the incumbents and also the startup fuel producers, and stable and predictable government policies to reduce the risk and enable a government support mechanisms to de-risk this capital,” Hussain said during the Farnborough International Airshow Connect on July 14.

California has adopted the Low Carbon Fuel Standard (LCFS) which works to reduce greenhouse gas emissions by setting annual carbon intensity (CI) standards which reduce overtime for gasoline, diesel, and the fuels that replace them. The LCFS gives credits to fuels with low CIs and deficits for high CIs. Dillard cited this policy for encouraging the production of SAF.

“Currently there is a policy of California, the LCFS, and that has enabled some initial deployment of the fats, oils, and grease technology pathways that are out there today because they’re getting an incentive for the CO2 reduction,” Dillard said. “That’s really helpful in overcoming that barrier, right, of that risk. We’re able to test those technologies there, we’re able to look at how that’s working, and it helps drive our research strategy.”

The Department of Energy has a $250 million budget allocated to research, development, and demonstration activities related to finding new pathways to create SAF, Dillard said. The pathways describe how SAF is produced. There are currently eight different pathways certified to produce SAF.

“Our SAF is produced from sustainable feedstock waste residues such as used cooking oil and animal fat, and then actually goes through a very, very involved process of getting it processed and certified,” Chandhoke said. “Generally, it’s very similar to jet fuel processing. This same kind of technology; it’s hydroprocessing, removing the oxygen component then further processing it to hydrocarbons. So very similar to an oil refinery. The only difference is that the feedstock is not from non-fossil sources.”

The Department of Energy and USDA have found that the nation could produce one billion tons of sustainable biomass feedstock from these used cooking oils, Dillard said.

“We in the Department of Energy, working closely with USDA, developed a billion tonnes report, which is really 15 years of resource assessment and understanding the science behind the biomass feedstocks, and what we have done is identified that the nation could produce one billion tons of sustainable biomass feedstock pretty much without interrupting the existing markets for food feed, fiber, and any other possible uses of that biomass,” Dillard said. “So this would be the additional biomass that could be produced, simply for energy production.”

However, these feedstocks will not be enough to sustain the amount of SAF the aviation industry will need to meet its goals while following sustainable practices. This is why the Department of Energy and private industry are researching other pathways to develop SAF. SkyNRG Americas is creating SAF from garbage, John Plaza, CEO of SkyNRG told Aviation Today. Plaza said that they take municipal solid waste in landfills and capture the methane that is emitted to create SAF.

“SkyNRG America’s focus is really on garbage and the related sort of components of garbage,” Plaza said. “So we focus on municipal solid waste that ends up in a landfill…a near term opportunity we think is most interesting is to take the landfill gas, the methane that is emitted, collected, and either flared or used for making electricity or other things, to convert that into sustainable aviation fuel.”

Plaza said that using methane in this way could result in five billion gallons of SAF. That type of potential lead Boeing to partner with SkyNRG in an effort to accelerate SAF development globally. Alaska Airlines is a partner as well.

“The analysis from the Department of Energy, the EPA, and others who analyze this biogenic methane [says] if we were to capture 20 percent of what’s being emitted today, we could produce about five billion gallons of sustainable aviation fuel,” Plaza said.

The problem is that to produce and distribute all of this SAF, there needs to be infrastructure.

“Well, like any industrial fuel refining facility, there’s the need to find the right location to build it, the feedstocks need to be secured, the engineering and permitting process can be arduous and lengthy,” Plaza said. “This isn’t any different for any other facility if you think about the petroleum refinery industry, we face a lot less challenging than that industry, but it’s still a new refinery so that that’s a complex process.”

While policy support and investments are pushing along the development of SAF, there is no magic solution that can make SAF appear in the market.

“We need to build capacity and that takes time,” Plaza said. “It’s not something that happens quickly, it’s a sophisticated process technology. There are long development cycles for these big industrial facilities.”

The goal that the airline industry has set for itself is two billion gallons of SAF by 2030. There will be a lot of factors that go into meeting this timeline so it is hard to predict if its attainable, Dillard said.

“We hope to bring more of these technologies closer to commercialization, which will accelerate the timeline,” Dillard said. “So I would say that we have a full approach looking between now, 2030 and 2050 when we really need to meet President Biden’s aggressive decarbonization goals, and we believe we can fully decarbonize the aviation sector in that timeframe. Sustainable aviation fuel plays a very important role in that, it’s not the only technology that’s working to decarbonize aviation, but it is a critical technology.”